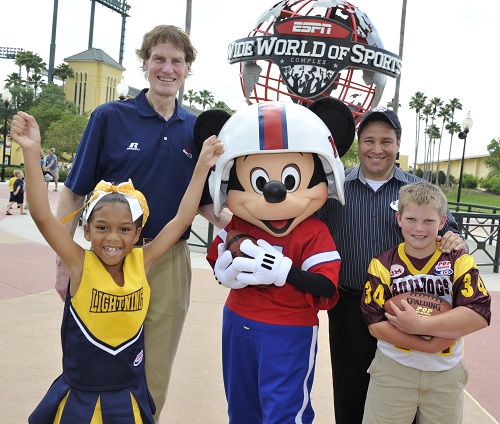 The expanded national coverage of the Pop Warner Super Bowl is the result of the ESPN rebranding of the 250-acre Disney sports complex, which included the addition of 40 high-definition video screens (three are jumbo screens), 56 high-definition cameras and a state-of-the-art HD and 3D Production Center with direct links to ESPN facilities in Bristol, Conn., New York and Los Angeles, which, collectively, gives more national exposure for the more than 350 events staged annually at the complex.

“We are thrilled to create more exposure nationally for the youth athletes who work so hard every season to reach the Pop Warner Super Bowl at the ESPN Wide World of Sports Complex,’’ said Ken Potrock, Senior Vice President of Disney Sports Enterprises and Downtown Disney. “Expanding the opportunities to showcase America’s youth athletes is just one of the many ways we are working with our key partners, such as Pop Warner, to help take youth sports to the next level.’’

The Pop Warner Super Bowl is part of the Pop Warner Little Scholars, Inc. (PWLS), the nation’s largest and oldest youth football, cheer and dance organization. The PWLS is a national non-profit organization that endorses and promotes teamwork, responsibility, leadership and scholastic achievement among young boys and girls ages 5 to 16.

“We’ve had a wonderful relationship with Disney for the past 14 years and we’re looking forward to continuing to work with them to make our event even better,” said Jon Butler, Executive Director, Pop Warner Little Scholars. “With the re-branding and impactful technical upgrades from ESPN, the ESPN Wide World of Sports Complex maintains its position as the best venue to host a youth sports event.”

This year’s 55th annual Pop Warner Super Bowl (Dec. 3-10), which includes the Pop Warner National Cheer and Dance Championships, will be held at Walt Disney World Resort for the 17th time, extending Disney’s decades-long association with the event. Walt Disney himself attended the 1959 Pop Warner title game when it was held in Anaheim, Calif.