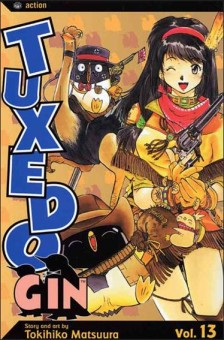 According to a story on Deadline.com, Disney has hired one of Hollywood’s most successful funnymen of the last few years to turn a Japanese romantic comedy comic book into a film appropriate for American audiences. Robert Ben Garant, who with his writing partner Thomas Lennon is not only responsible for one of the funniest shows on TV in a long time (RENO 911), but also for the recent book Writing Movies for Fun And Profit, has been signed to adapt the graphic novel Tuxedo Gin.

The name will be shortened to just Tux for Disney audiences and follows the story of a young street fighter who enters a karmic coma and finds that his misdeeds have caused him to be reincarnated as a penguin. He then attempts to complete good deeds to win back his human body and the affection of the girl he loves.

Despite the odd backstory for this movie, I’m cautiously optimistic for its success. Ben Garant has had a string of strong box office hits (and a weak one or two) including: Night at the Museum, Herbie Fully Loaded, Balls of Fury, and The Pacifier. Yes, Tux will be a talking animal film and yes, there hasn’t exactly been a great history of converting Japanese stories into American films, but writer/artist Tokihiko Matsuura has created something that is incredibly popular and already has a fan base in the US via translated manga books.

Anyone out there a fan of Tokihiko Matsuura or Tuxedo Gin? Do you think this will translate well for American audiences?