Captain America, Wait is this a Disney Film? 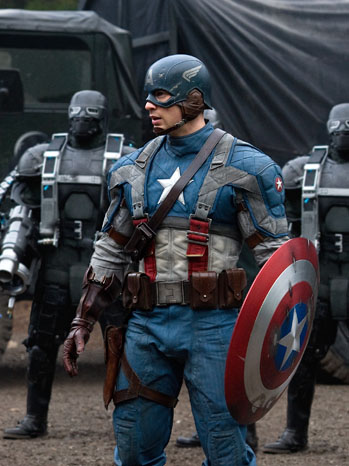 It’s still taking a little getting used to for me to accept that these Marvel superhero films are now Disney films as well. Yes, technically Paramount is still distributing Captain America, but Marvel is 100% Disney now. There’s no denying that Disney has a new set of live action film stars on its hands. Thor, while not a game changer, was a pleasant success. Now Captain America up next to see what sort of damage he can do at the box office. Next year’s The Avengers will be the real test.

Early reviews for Captain America are good. Fan boys (and girls) will certainly like it. It sounds like they did a good job setting up the mythology that eventually becomes the basis for the other heroes and organizations in Marvel’s The Avengers multiverse without too much deviation. It also sounds like there are no issues with returning to a World War II setting yet again for another film. Apparently America’s appetite for showing how badass we were as a fighting force has no bounds, not sure how well that will play in the rest of the world, however.

Ready or not, Captain America will hit theaters this Friday. How does the first Avenger fit into your summer movie-going plans? A must see? or a wait and see?

5 thoughts on “Captain America, Wait is this a Disney Film?”

previousMovement on Disney Gargoyles Film, but not Good News for All
nextRobot Vinylmation Invades the Disney Store