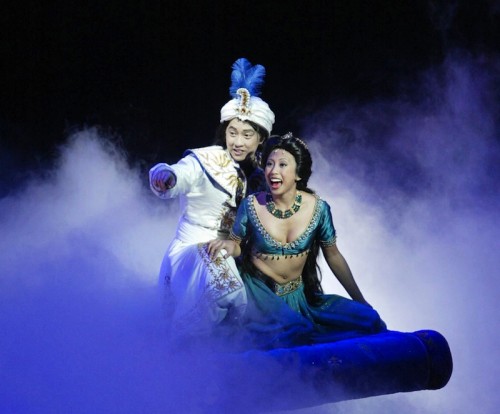 On Thursday, the Disney Parks blog announced that “Disney’s Aladdin – A Musical Spectacular” will run on the Disney Fantasy. As I wrote in a previous post, a full stage production of Aladdin is expected to open at the 5th Avenue Theatre in Seattle this July. This leads me to believe that the Seattle version is not intended to transfer to Broadway, but maybe was planned to gauge reactions to the show before it mounts on the Fantasy. While Disney’s California Adventure does have an Aladdin stage show, the Seattle version more easily allows Disney to test new show elements than the theme park show allows them to. Let’s take a look at a few other things that will be on the Disney Fantasy.

The nightlife district of the ship will be distinct from the Dream. Because the Disney Cruise Line is now to sailing in Europe, the clubs, bars, and lounges of their new ship all reflect Europe. Adult guests will be able to visit “Europa” which includes La Piazza, Skyline, O’Gills bar,  Ooh La La, and The Tube – as you can see, options range from a traditional Irish pub to a nightclub inspired by the London underground transit system.

But don’t worry, Disney didn’t forget about the kids! The Disney Fantasy will include a branch of the Bibbidi Bobbidi Boutique, so young princesses to be will be able to get dolled up just like they can at the parks. This boutique is a little unique, though. During special pirate party nights, guests of all ages will be able to receive a pirate makeover.

What other features would you like to see included onboard the Disney Fantasy?

previousIs Change at Disney Always a Move Forward?
nextThe debate over Free Wifi in the parks