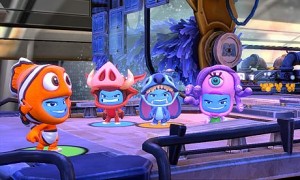 A screenshot from Disney Universe

Disney Interactive Studios recently held a preview of their upcoming game “Disney Universe.” The game is a first for the developer in a variety of fronts. It allows for characters of one Disney franchise to play in the world of another. It also features characters from Walt Disney Animation Studios, Walt Disney Pictures and Pixar Animations Studios. In reality, there are no “actual” Disney characters. Players will take the form of avatars who can dress up as one of 40 beloved Disney names. Some of the playable costumes include Alice (the Tim Burton version,) Mike Wazowski, Stitch, Tron, Nemo, Pumbaa, and many others.

Gameplay includes up to four characters collecting items, solving puzzles and fighting enemies through six distinct worlds, broken into even more levels and areas. Two of the confirmed worlds of gameplay are Tim Burton’s Wonderland and the city of Monstropolis. Players will work together, but sometimes be forced to compete against each other. The game will adjust itself depending on how well the players are doing, thus making it easier if you are an inexperienced player, or more advanced if you are a hardcore gamer. The producer of the game, Iain Richie, confirmed that there will be post-release content that can be downloaded including new costumes and worlds.

Disney Universe is set for a Fall 2011 release and will be available for Xbox 360, PS3, Wii, PC and Mac. After the release of Epic Mickey exclusively on the Wii, I’m excited to see Disney expanding into other platforms. However, I would have almost preferred that they delay this title for Nintendo’s upcoming console, currently referred to as “Project Cafe.” The UK site for Disney Universe says that more details will be available June 7th. I’ll be sure to report back to you.

And here’s a short video teaser for Disney Universe

Based on these details, do you plan on purchasing Disney Universe? What other characters/worlds would you like to see included in the game?