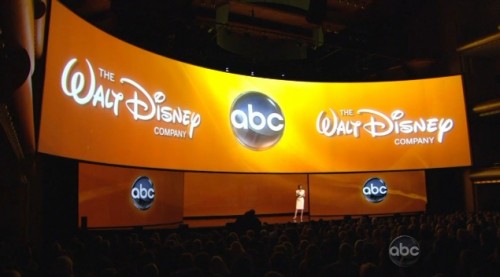 Last Man Standing is a new comedy that will air Tuesdays at 8pm EST. The show centers around Tim, played by Tim Allen, who “works for a sporting goods store, drives a truck, and drinks beer.” The show also features Nancy Travis (Greedy, Three Men and a Baby), Molly Ephraim (Paranormal Activity 2, Into the Woods & The 25th Annual Putnam County Spelling Bee on Broadway), and Héctor Elizondo (Chicago Hope, and Callie’s father on Grey’s Anatomy.) ABC brought Tim Allen out to do some stand-up for the audience in an attempt to prove that he can still be funny. The preview clip marketed the show as “a woman’s world that he just has to live in.” While this looks like something my dad might watch, it didn’t look as solid as the rest of the new lineup. Pass. 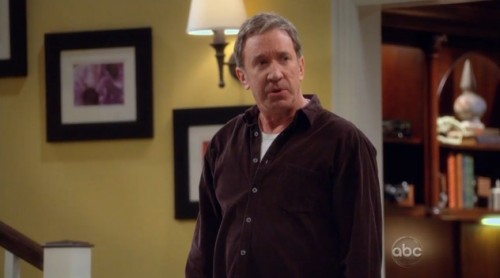 Man Up is another comedy that will air Tuesdays at 8:30pm EST. Will comes from a war family (his father & grandfather both were soldiers) but he is more interested in playing Call of Duty. He works as an insurance salesman, but spends more time hanging out with his friends than caring about his job. Will is played by Mather Zickel (I Love You, Man, Rachel Getting Married) and the show also stars Christopher Moynihan (Coupling), Dan Fogle (Mars Needs Moms, Love Happens, Balls of Fury), and Teri Polo (Meet the Parents trilogy, I’m With Her.) This series looks like a comedy for bros…perhaps ABC is trying to capture some of the audience from How I Met Your Mother?

Suburgatory is a comedy that will air Wednesdays at 8:30pm. The series follows single father George as he moves himself and his daughter Tessa from New York City to a house in the suburbs. The show stars Jeremy Sisto (Law & Order, Siz Feet Under) as George and Jane Levy (Shameless) as Tessa. The show also features Allie Grant (Weeds), Alan Tudyk (Dodgeball, Firefly), and Cheryl Hines (Curb Your Enthusiasm, RV.) Paul Lee, President of ABC Entertainment Group, proclaimed that Levy will be a “breakout” star, and she does look like she’ll be able to anchor the show.

Happy Endings is a comedy that will air Wednesdays at 9:30pm. The show debuted April 13, 2011 as a midseason replacement. The first season is still airing. The show centers around the break-up of the central couple and the impact it has on all of their friends. The series stars Zachary Knighton (FlashForward) and Elisha Cuthbert (24). Anyone I know who watches this show claims that it’s good, so maybe I’ll give it a chance in the fall.

Revenge is a drama that will air Wednesdays at 10pm. The series is set in the Hamptons and follows Emily as she moves into this exclusive neighborhood. Unknown to her new neighbors, Emily knows everything about them, including how they destroyed her dad’s life when she was younger. As Emily learns the secrets of her neighbors, she puts this to her use as she seeks revenge. Emily is played by Madeleine Stowe (China Moon, Raines) and other actors include Emily VanCamp (Brothers & Sisters, Everwood) and Gabriel Mann (Mad Men, A Lot Like Love.) The preview for this show looked interesting, but they clearly didn’t want to give too much away. (I was watching the tweets from audience members, and one person put it this way: Revenge looks good, but it looks like it should be on the CW. Perfect description.)

Charlie’s Angels is a retake of the classic 1970’s series that will air Thursdays at 8pm. The show centers around three female private investigators in Miami as they take directions from the voice of their boss, Charlie. Starring Annie Ilonzeh (General Hospital), Rachael Taylor (Grey’s Anatomy), and Minka Kelly (Parenthood, Friday Night Lights, The Roommate) this show will be an interesting one to watch, as the writers try to decide how true to stay to the original. The preview clip showed that the new series won’t stray too much from the popular show. From Executive Producer Drew Barrymore, this show was referred to as the “Thursday night anchor” and “a great lead-in to Grey’s Anatomy” by Lee. The series looks sexy, thrilling, and appears to be a modern take on this trusted franchise.

Once Upon a Time is a series by Adam Horowitz and Edward Kitsis, most known as writers for the ABC series Lost (as well as Tron: Legacy.) The show follows bail bonds collector Emma Swan as she finds her 10-year old son who she gave up. Her modern day reality collides with fairytales. Jennifer Morrison (How I Met Your Mother, House) stars as Emma, with Joshua Dallas (Thor), Gennifer Goodwin (Big Love, Mona Lisa Smile) and Lana Parrilla (24, Spin City). Lee referred to this show as similar to Lost, but the characters are trapped in a small town instead of on an island. This looks like a thrilling fantasy story with some stunning visuals. With reputable writers, this show will probably rake in the viewers.

Pan Am is a drama series set in 1963 following the rise of air travel as it becomes the new standard of luxury. The pilots are arrogant, the flight attendants are sexy, and the rules are being broken. The show stars Christina Ricci (The Opposite of Sex, Monster) and Jonah Lotan (CSI: NY, 24). This show looks and feels like the Mad Men for airlines. From the clip, it appears that ABC is holding onto a few secrets about this series. Definitely one to watch. 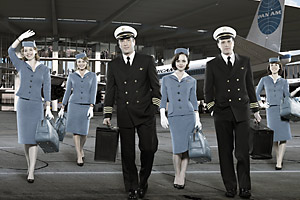 ABC also previewed several new series that will act as mid-season replacements including Apartment 23, Work It (this one looks awful), Good Christian Belles (Kristin Chenoweth!), Missing, Scandal, and The River.

The way I see it, we have three categories of shows coming up.

Hits: Once Upon a Time, Pan Am, Suburgatory, Charlie’s Angels

Out of the midseason replacements, I would guess that Apartment 23 will be relatively successful, whereas Work It will fall harder than any other new show.

Which shows do you think will survive? More important, which shows will you actually watch? As a reminder, John is looking for people to cover every ABC shows. Check out some of my Modern Family recaps for an example of what he’s looking for. Email John if you are interested.