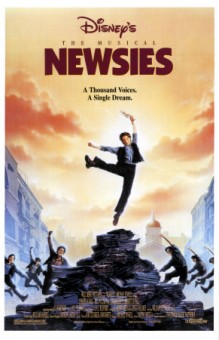 Just read the news that a Broadway version Newsies is in pre-production at Disney Theatrical. On one hand the mind boggles. The movie was a flop, few of the songs memorable, and it was made almost 20 years ago. On the other hand this is the biggest ‘no duh’ move that Disney Theatrical has ever made. Newsies has a small but obsessive fan following, it helped launch Christian Bale’s career (although I’ve heard he regrets his participation), and Kenny Ortega was the director and choreographer. Thankfully, they’re planning to make some changes, add some songs, and re-write the book before it hits the stage and they’ve got serious talent, like Alan Menken etc… lined up to produce the new show.

This has me thinking. What other Disney movies are just waiting for their Broadway Treatment?

The Hunchback of Notre Dame
I know, Disney Theatrical already produced a stage musical of Hunchback. But it showed mainly in Europe (in German). The production was a bit avantgarde for American audiences. I’d like to see a new production that lays somewhere between the Disneyfied version of the story and the darker original novel.

Jungle Book
If Disney can attempt to bring Tarzan to the stage, then Jungle Book deserves its chance too. I see this as a cross between the acrobatics of Cirque Du Soliel and Hair. Keep the movies humor for the kids and layer in some political winks and nudges for the adult and you’ve got a hit.

Return to Oz
I believe the Oz series is ready for a stage sequel. This dark semi-classic has a lot going for it in terms of story. All it needs now are some songs.

Sleeping Beauty
There is no better Disney villain than Maleficent and the score is literally a classic. Beauty doesn’t have quite the ‘girl power’ message that more modern stories do. But it is definitely one of Disney’s classic movie musicals that never made it to the stage. Think of a giant dragon puppet. I think Julie Taymor could make it work, but I’d be nervous to let her try.

Goofy
A combination of the two Goofy Movies. The story of a father and a son who are trying to find their way to become a family is perfect for the stage. The movies are under appreciated in my book and many of the songs, particularly from the first movie, are very memorable. Plus, this is a perfect vehicle to get Nathan Lane and Matthew Broderick back on stage together. (I’m only partially kidding.)

Any Disney films that you would like to see on Broadway?

16 thoughts on “5 Disney Films that Deserve A Broadway Musical”

previousDream of EPCOT Becoming Reality
nextDisneyland to bring back PeopleMover?