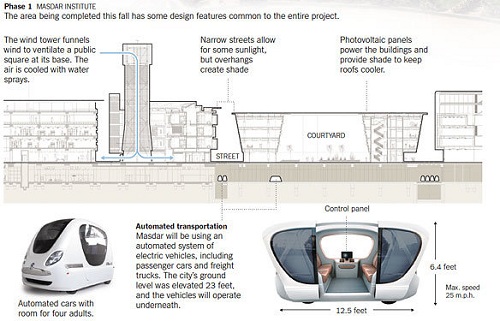 Unfortunately, this is not a schematic of anything coming to WDW

The original idea Walt Disney had for his Florida project was to create a whole new type of city. A place that would be on the cutting edge for environmentally friendly technology, mass transit, and urban planning. While the Disney company did eventually build the community of Celebration, it didn’t measure up to Walt’s original dreams for EPCOT.

That dream is finally becoming a reality in the middle of the dessert of Abu Dhabi. Masdar will be the world’s first “Zero-carbon” city and will have many elements that appear cribbed right from the Disney theme park design toolbox. From underground corridors to peoplemover systems to streets where only pedestrians are allowed, Masdar sounds a lot like something you would find in the middle of Florida.

The city will eventually house around 90,000 residents and occupy about 2 square miles (including the solar plant, utilities, and recreation areas that surround the city). The small size of the experiment has me wondering why there is nothing like this in the US, and specifically, why the Walt Disney Company isn’t at the forefront of such an effort. Disney could be exciting generations of visitors with a vision of a future that works. It would definitely have to involve a number of partnerships with other businesses and probably some government entities (for zoning, research, and other reasons). But it is definitely achievable.

If you’re interested in learning more about Masdar, check out this NY Times article. There is a really informative graphic which goes into details about how it all works.