Beauty and the Beast DVD coming out of the vault 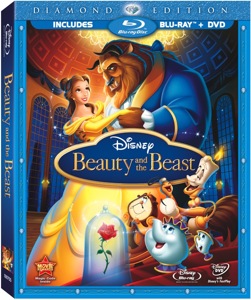 You may have heard that the Walt Disney Company is working on a 3D version of their popular Beauty & The Beast animated feature, but you may not have realized that it’s been 7 years since the DVD version of that movie was put in the vault. Now, Disney is preparing to release a ‘Diamond Edition’ on Blu-ray and DVD just in time for Christmas shopping this year.

I’m not sure this is the best move if they want to build excitement for the 3D version when it hits theaters. But I am looking forward another generation getting a chance to see one of my favorites of the modern tales for the first time.

Correction: This DVD is still scheduled for release on Oct 5th. Nov 10th is the UK release date.

Beauty and the Beast: Diamond Edition

The tale as old as time is told once more as Walt Disney Studios Home Entertainment proudly announces the Blu-ray high definition debut of Disney’s animated masterpiece, Beauty and the Beast, released on Disney Double Play on 1st November 2010.

One of Disney’s best loved Princess movies, Beauty and the Beast arrives for the first time in dazzling high definition to enrapture a brand new generation. Enchanting grownups and children alike, the magic of the story that taught us never to judge a book by its cover can now be seen in its full glory in the latest installment from the Diamond Collection.

The sweepingly romantic tale of dreamy Belle (Paige O’Hara), who longs for adventures outside of her ‘provincial life’, and the tormented Beast (Robbie Benson) she falls in love with, is a classic fairytale, brought to life in spectacular form.

The first Disney film to employ CGI techniques, the movie’s breathtaking and groundbreaking ballroom scene has gone down as one of the most memorable in Disney Princess history, and this time round Belle and the Beast will take to the floor in spectacular high definition.

The first of only two animated films ever to be nominated for an Academy Award® for Best Picture (the second is 2009’s Up), Beauty and the Beast earned six Academy Award® nominations and won two Oscars® in 1992 for Best Original Song (“Beauty and the Beast”) and Best Original Score. The unrivaled musical score also won out at the Golden Globes® and Grammy Awards as well as inspiring the hit stage musical, which became one of Broadway’s longest running shows.

With state-of-the-art picture restoration, pristine 7.1 Digital Surround Sound and hours of additional viewing experiences that include an exclusive re-recording of Beauty and the Beast by American Idol star Jordin Sparks behind the scenes features, deleted scenes, and immersive games, Beauty and the Beast is a must have for all those who want to remember the magic.