Alice in Wonderland on DVD/Blu-Ray Today 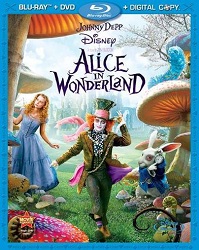 Disney’s billion dollar box office hit and Tim Burton’s epic fantasy adventure, Alice in Wonderland, comes out today on DVD and Blu-Ray disc in either a 3-Disc Blu-ray Combo Pack (Blu-ray + DVD + Digital Copy), 1-Disc Blu-ray, or 1-Disc DVD. So no matter what your format, you can add this wacky and visionary feature film that revisits the world of Wonderland.

The Alice in Wonderland Blu-ray Disc Combo Pack provides audiences with the chance to experience a magical and imaginative twist on some of the most beloved stories of all time in pristine 1080p picture and Dolby Digital 5.1 HD surround sound quality and has been especially packaged with family and fans in mind – with lots of exciting bonus features and an extra DVD and Digital Copy of the movie.

The Blu-ray Disc versions of the film include nine bonus features that take viewers deeper into the famous “Rabbit Hole” – exploring more of the world of Wonderland, its iconic characters and the making of the film. Features include the making of the Futterwacken Dance, a look inside the world of the Mad Hatter and Johnny Depp’s transformation, Tim Burton’s vision for the movie and its characters, the visual effects of growing and shrinking of Alice, costume designs, music, stunts and more.

I saw the film in 3D at the theaters, but obviously the DVD isn’t. I don’t think you’ll be missing anything, without the 3D. There are just a few moments where the director made some obvious choices for the 3D format, but the rest functions as any normal film. I do have to recommend that you purchase the DVD Blu-Ray combo since many of the special features are only available on the Blue-Ray disc. A practice I wish they’d end. Maybe one exclusive feature is okay, but this set puts nearly all of them on the blu-ray exclusively.

Tumble down the rabbit hole with Alice for a fantastical new adventure from Walt Disney Pictures and Tim Burton. Inviting and magical, Alice in Wonderland is an imaginative new twist on some of the most beloved stories of all time. Alice (Mia Wasikowska), now 19 years old, returns to the whimsical world she first entered as a child and embarks on a journey to discover her true destiny. Wonderland is a world beyond your imagination and unlike anything you’ve seen before. The extraordinary characters you’ve loved come to life richer and more colorful than ever. There’s the Mad Hatter (Johnny Depp), the White Queen (Anne Hathaway), the Red Queen (Helena Bonham Carter), the White Rabbit (Michael Sheen) and more. A triumphant cinematic experience – Alice in Wonderland is an incredible feast for your eyes, ears and heart that will captivate audiences of all sizes.

Finding Alice – It’s all things Alice. This featurette includes Tim Burton’s vision for the characters, differences from the book and Disney’s version of Alice and how she evolves as both a character and actor as she takes an adventure through Wonderland.

The Mad Hatter – Audiences are provided with a deeper look into the world of the Mad Hatter. Check out Johnny Depp’s early sketches, make-up, costumes and how they digitally enhanced his eyes.

Effecting Wonderland – A behind-the-scenes piece on the different technologies used to create some of the most beloved characters in the film – Stayne, Tweedledee, Tweedledum, Bandersnatch and the Red Queen.

Everything on the DVD plus:

The Red Queen – The creation of the Red Queen from start to finish, including early Tim Burton sketches showcasing costume designs, make-up and digital effects.

Time-Lapse: Sculpting the Red Queen – A short time-lapse piece showing Helena Bonham Carter as she gets her make-up done. A three-hour process can be watched in just a few short minutes.

The White Queen – An interview with Anne Hathaway, who plays Wonderland’s good queen, about her character’s journey throughout the process of the film.

Stunts of Wonderland – A featurette highlighting some of the biggest stunts in the film.

Making the Proper Size – An inside look at the visual effects process of growing and shrinking Alice. See how filmmakers used different techniques to stay true to the storyline.

Cakes of Wonderland – Take a trip to “Cake Divas” where the creators of the EAT ME cakes provide viewers with details about how they made the smallest crumb to the largest cake in scale.