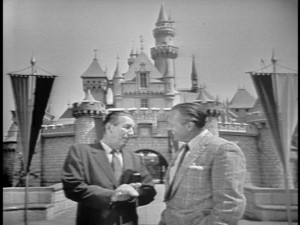 Disney Legend Art Linkletter died at his home at the age of 97, according to the LA Times. Linkletter’s career started on radio in 1944 and then he made the move to TV in the 50s and 60s. A close friend of Walt Disney, Linkletter was the live television host for the opening ceremony at Disneyland in Anaheim, CA. He also hosted the 1959 television special for Disneyland’s first ‘New Tomorrowland’.

Since opening Disneyland left Walt Disney nearly broke, he was unable to pay Linkletter anything more than scale wages for his job as TV host. But Linkletter, ever the savvy businessman, asked for and received the rights to sell camera film and flashbulbs for the first 5-10 years of the park.

In many ways Art Linkletter and his family was the first really Disneyland fan. He had one of the first Gold Passes issued and spent a lot of time at the parks with his family. I love this article referenced by Wade Sampson where Art talks about his love of the park. 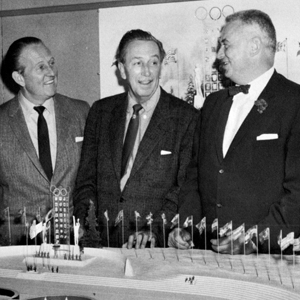 The 1960 Winter Olympics featured another partnership between Disney and Art Linkletter. Disney had been asked to organize the opening ceremonies. Of course, he called on his friend to be the vice president of entertainment for the Olympics.

In 2005 Linkletter was inducted as Disney Legend. He was also regular fixture at the theme park as it celebrated its major milestone as well as a friend to Disney fans and collectors. Our appreciation and condolences to his family and friends.