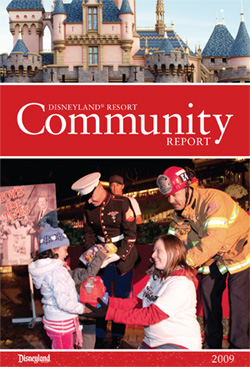 With a special emphasis on the well-being of children and families, the report addresses the Disneyland Resort’s commitment to its employees, its guests, the environment and the community. The Disneyland Resort is proud of the many accomplishments in this report, which include more than 58,000 VoluntEAR hours donated, 43,000 tons of materials diverted away from landfills through recycling and donations and more than 500 wish trips granted to children with life-threatening medical conditions.

As the largest single private employment site in the United States, Walt Disney World Resort and its more than 58,000 Cast Members play a vital role in Central Florida. The 2009 Community Report details their commitment with a focus on Disney’s accomplishments related to the environment, workplace and community, with a special emphasis on the well-being of children and families.

For the most recent corporate responsibility report from the Walt Disney Company, please visit www.disney.com/crreport.