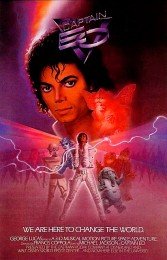 In 1986, twenty-three years ago and near the top of his power as an entertainer, Michael Jackson joined forces with Disney to create “Captain EO,” a 17-minute 3D film. The Disneyland Resort has now confirmed that the classic musical spectacular that thrilled park guests from 1986 – 1997, will return for an exclusive, limited engagement at Disneyland park beginning in February 2010.

Directed by Francis Ford Coppola and Executive Produced by George Lucas, it was the most expensive film ever made on a per-minute basis, averaging out at $1.76 million per minute. The 3D film utilized in theater effects (smoke, lasers, etc) that interacted with the movie. Producer Rusty Lemorande and Disney called this “4-D” and Captain EO is known as the first “4-D” film. It’s unclear how many of those effects will be recreated for this return.

Starring the talents of Michael Jackson, Angelica Houston, and Comedian Dick Shawn (who died one year later) the film was very popular with guests who often waited hours to get into the show. Jackson, of course, also performed two songs in the movie (“We Are Here to Change the World” and “Another Part of Me”) while the rest of the score was written by James Horner.

The attraction’s return to Tomorrowland will provide new audiences the opportunity to experience the original 3D production for the very first time, as well as a nostalgic look back for longtime fans wanting to see “The King of Pop” in a rare performance created for the big-screen, just one more time. I hope they’re reproducing those nifty Captain EO T-shirts too.

As recently as September 10th, Disney CEO Bob Iger was quoted as saying that there were no plans to bring Captain EO back to Disneyland. However, there were reports of test-showings for executives, and the Jackson family, to see if it could be done. “Honey I Shrunk The Audience” will be closing sometime in the next few weeks to make way for the Captain’s return. No word yet if the Captain will be making an appearance in EPCOT anytime soon.

4 thoughts on “Captain EO to change the world again”