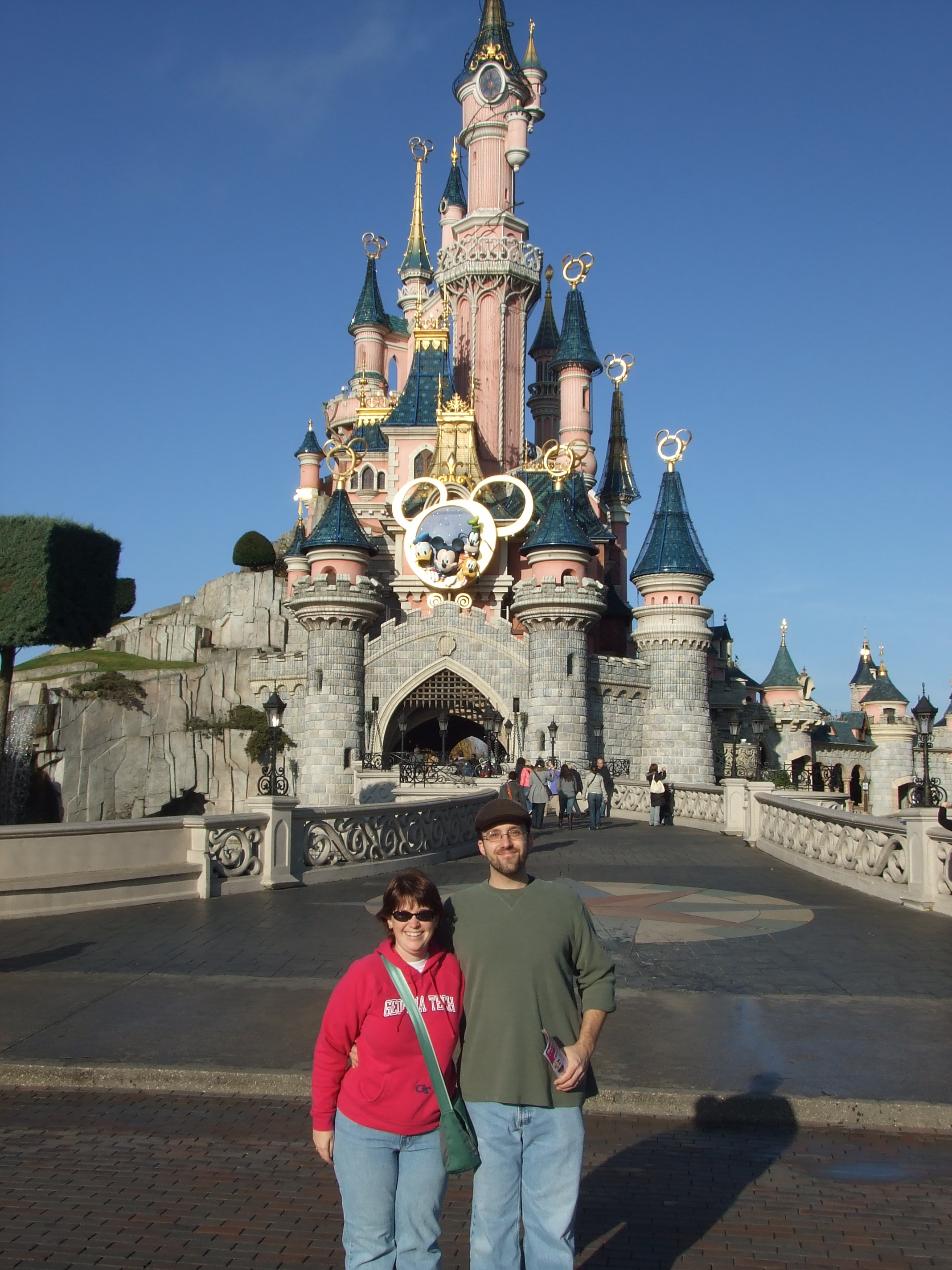 We (my husband and I) were fortunate enough in November to make it to Disneyland Paris! We only got to spend 4 days there, 3 in DL and one in Paris proper, but it was such a fun time! Below are a trip report and some observations that we had while we were there.

There are two parks in Paris, Parc Disneyland and Walt Disney Studios, a very small Disney Village, and 5 hotels. All are within walking distance of each other, as is a train station which goes to CDG airport (11 minutes by TGV) and the city of Paris.

Parc Disneyland is set up much like the Magic Kingdom or Disneyland. There are five lands surrounding a central hub and a castle. Le Château de la Belle au Bois Dormant (Sleeping Beauty Castle) there is amazing! It has the size and wonder of Cinderella Castle, yet the story of its sister castle in Disneyland. There is a great walkthrough, much grander than that in California, in the upstairs, told through stained glass and tapestry. My favorite part of Sleeping Beauty Castle is that there is a dungeon in the bottom, complete with a moving, breathing dragon. Unfortunately, the pictures I was able to get of this terrifying beast did not come out that great, but I don’t think the pictures would do it justice anyway! It was absolutely amazing and we went back to see the dragon several times each day.

The things I liked a lot at Parc Disneyland were many. The hub- it was a stage. This meant that there could be a show going on but the Castle wasn’t blocked. At no time was the Castle walkthrough closed. That was awesome! Space Mountain- take anything you know about Space Mountain and through it out the window! This one was more like Rock ‘n’ Roller Coaster than anything else- you are launched up a tube on the outside and into loops and corkscrews and it was terrific. Big Thunder Mountain- the coaster itself is an island, but the boarding is on the main land, so you go underwater to the ride proper, which was really cool.

The two attractions which stood out the most to me as different from WDW were Phantom Manor (aka Haunted Mansion) and Pirates of the Caribbean. The story line in Phantom Manor was one cohesive story rather than different stories in different rooms. It was eerie yet had the fun, friendly atmosphere I expected. Also, there was no ghost host. Pirates was really amazing! While some scenes were identical to WDW (except in French) many new ones were there and it was a lot of fun. This version has not been changed to suit the movie franchise.

We stayed at the Hotel New York, one of the 5 hotels on property. It was nice but nothing spectacular. The hotel staff was great and everyone we met made sure that our stay was magical. We did walk around all of the hotels, and decided our favorites were the Sequoia Lodge and of course the Disneyland Hotel, but budget prevented us from staying there.

Overall, we enjoyed our time at Disneyland Paris but there were some things that were negative. First, the whole city of Paris was filthy, and while Disney property was cleaner, it was still dirty. There were cigarette butts and trash everywhere. Speaking of cigarettes, everyone there smokes, and Disney didn’t really enforce their smoking areas, so we had people smoking all around us, including the queues. There was graffiti on the wall leading up to Peter Pan’s flight and in some of the restrooms. One restroom I went into had no toilet paper in several of its stalls about 10 minutes after park opening.

Also, for example, in the Pirates queue there were electrical outlets visible to guests. I know outlets are necessary but they just didn’t fit in with the theme. There were dust and cobwebs (and not in places they should be like Tower of Terror). I just really expect more from a Disney experience than that.

But would I go back? In a heartbeat! I’d recommend it to anyone!