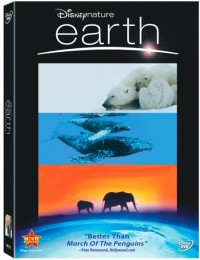 Available in a single-disc DVD or two-disc Blu-ray Hi-Def/DVD Combo Pack, Earth includes bonus features that offer viewers an in-depth look at the making of the film and an opportunity to learn more about our planet and its myriad fascinating inhabitants. In Blu-ray, the film gives audiences an unmatched opportunity to view its dizzying aerial photography, epic backdrops and rare footage of land, sea and air in astonishing high definition.

Bonus Features for Earth
Both Blu-ray Hi-Def and DVD include:
• Earth Diaries — The making of Disneynature’s first feature film

• Filmmaker’s Annotations — An in-movie experience with pop up facts

In the Arctic, a mother polar bear trailed by her two cubs searches for food as their icy hunting grounds melt away. A herd of African elephants slowly traverses the arid Kalahari Desert toward the water-rich Okavango Delta. A humpback whale and her calf make a 4,000-mile journey in an epic migration that takes them from tropical waters all the way to Antarctica. Remarkable high-definition footage follows these creatures and more to places human beings rarely see, capturing unique worlds populated by Mandarin ducks and birds of paradise, as well as a pride of lions and a vast caribou herd. Filled with surprising facts and extraordinary images, Earth is a dazzling portrait of life on our planet.