The Jonas Brothers Deserve Their Success

Please welcome back Mark Storer to The Disney Blog. – Editor 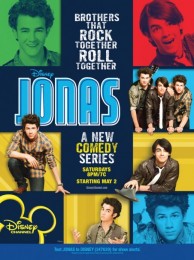 I grew up listening to and playing music. When I was young, it was the Jackson 5 and the Osmond Brothers that dominated the pop scene. Others were prevalent, too, of course. I remember all the girls in class swooning over Bobby Sherman, David Cassidy and all the rest.

But my teenage years were filled with a pretty serious music focus and the late 70’s and early 80’s were pretty good to pop and rock music. Sure, the radio was banging out Journey and Loverboy, and my brother loved those bands, but I started along a different path around the age of 15. My oldest brother was (and is) a very fine drummer and he got me into jazz. Chick Corea, Al DiMeola and others represented a new twist for me. There were longer songs with complex rhythms and melodies that challenged as well as entertained.

And that led me to progressive rock, a path I took around the same time, and I never looked back. My friends Greg and Eric got me into the music of Yes and from there, I branched off to Rush, Genesis, King Crimson, Marillion and others. These bands and their music were a revelation to me and remain so. I still listen to them quite often.

So when my 8-year old daughter started getting more into music, I tried hard to get her to listen to some of the things I listen to. My tastes are pretty broad and varied now and if I put on the Young Dubliners or Queen, she’ll listen and even get into it. But I’m afraid I haven’t reciprocated as well as I could.

No, Hannah Montana and Taylor Swift really aren’t my cup of tea. I’ll confess that I tap my toes to the occasional Hannah/Miley song and I do think the young lady has a great voice, but there isn’t a lot there for a 44 year old guy.

Then, my daughter started listening to the Jonas Brothers and my first response was the same—more “bubble gum pop rock.” That definition does indeed carry some validity, but as I listened, I heard some old echoes pop up.

My favorite of the early 70’s, the time when I was 8-years old, was the Osmond Brothers. This family of musicians, all of whom were talented singers and players, wrote sappy, silly love songs and other teen fare. They knew who their target demographic was and they hit it pretty well, selling albums (the vinyl ones) and going platinum and beyond.

So, I started listening a little closer and watching with my daughter when the Jonas Brothers came on T.V. They seem like genuinely nice people and their parents are involved in their career—just like the Osmonds, and the songs they write are the sappy, silly love songs of the 21st Century and yet, like the Osmonds, some of the songs have some nuance, some flavor.

For example, the song “Lovebug” is, from a musical point of view, a fairly layered and textured piece of work with some very good vocals and a strong melody. Recently, the Disney Channel has been playing the Jonas’s song “Paranoid” and here again, the lyrics are a little deeper, a little more meaningful and the music, while still certainly not multi-layered and richly textured, is not simplistic.

So, sure, this is about Disney’s ability to spot talent. Once the talent is found, however, the talent has to deliver. It appears that the Jonas Brothers are doing just that—not just monetarily, but with passion for what they do, just like their predecessors from Utah, all of whom understood both music and their audience.

There are, of course, detractors of the Jonas Brothers, as there always are when anyone garners such public adulation and adoration. There are rumors that the Jo-Bro’s lip synch and don’t play their instruments. Most sources, however, including the brothers themselves, say that this isn’t true. Do they, in various Disney videos and commercials engage in this practice? Sure, that’s pretty standard. But the Jonas Brothers seem honest and sincere in the pursuit of something they are pretty obviously good at. It’s fairly evident that they are not a media creation, but a media phenomenon and though it’s easy to sit back and criticize, the fact is The Jonas Brothers make music that kids want to hear. They play and sing well and, perhaps most importantly, they seem to love what they do and have a pretty good grounding in their morals and beliefs.

If that’s what my daughter wants to listen to, she can do so all day long.

Catch more from Mark Storer over on his blog.