In Encore!, Disney World Cast Members Perform for Good Cause 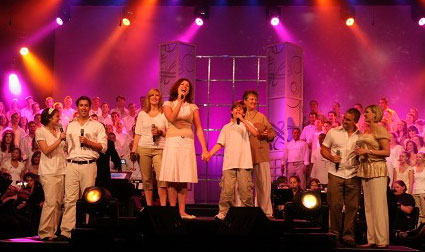 One of the amazing aspects of Walt Disney World is all the amazing talent the cast members have. Not just those who audition for roles in the stage shows, but also front line cast members who are great performers in their own right.

Encore! Cast Choir and Orchestra – a volunteer ensemble of nearly 300 talented Disney Cast Members – is currently in rehearsals for their next production, “Revolution! – A Musical Flashback to the 60’s and 70’s.” Shows are planned for July 23-25, 2009 at Epcot World ShowPlace and tickets are available to the general public.

Known for staging spectacular charity concerts, Encore! has chosen United Arts of Central Florida as the beneficiary of their performances for the second year in a row. United Arts is a collaborative partnership of businesses, government, foundations, arts and cultural organizations, school districts, artists and individuals that work to enhance the quality and variety of cultural experiences available in Lake, Orange, Osceola and Seminole counties.

Tickets are $15 and available through www.encorecentral.org.

1 thought on “In Encore!, Disney World Cast Members Perform for Good Cause”