I’d like everyone to welcome Mike to The Disney Blog as guest author. Mike comes to us from The Pixar Blog, where this review may seem a little out of place.

Walt Disney’s second animated feature production Pinocchio arrives tomorrow on 2-Disc Platinum Edition DVD and Blu-ray Disc, in celebration of its 70th anniversary. I got an advance copy of the Blu-ray this morning and, well, I’m thrilled. Pinocchio is one of Disney’s most enduring classics, and a personal favorite for me, so it’s good to see it receive such a high-quality home video release. (The only thing better would have been a special theatrical re-release.)

Everything about the Pinocchio: 70th Anniversary Platinum Edition, from the (very shiny!) packaging to the included extras, demonstrates the work Disney put into preparing it. As for the film itself —hate to use a cliché— it’s never looked and sounded better.

Disc One includes trivia and sing-along bonus features, as well as audio commentary by film historian Leonard Maltin and others. Contained on Disc Two is a documentary entitled No Strings Attached: The Making of Pinocchio that follows the production of the movie, two never-before-seen deleted scenes and an alternate ending from the Disney Archives, a featurette about Walt Disney’s ‘sweatbox’ artistic review process, live action reference footage, art galleries, a collection of deleted songs, and games. (Whoa! Have to take a breath!)

The Blu-ray version offers everything found on the DVD (like all the bonus features mentioned above) plus more, spread across two discs. Pinocchio is presented in stunning 1080p high definition video (1.33:1 aspect ratio) with up to 7.1 DTS-HD Master Audio (48 kHz/24-bit). French and Spanish tracks are in 7.1 DTS-HD High Resolution Audio and 5.1 Dolby Digital respectively. This marks the first time that Pinocchio can be enjoyed in hi-def.

Bonus features are in 1080p, 1080i, and 480i resolutions, with audio in Dolby Digital 2.0. Included are several Blu-ray exclusive functions such as Cine-Explore and the Disney BD-Live Network.

Additionally, bundled in the Blu-ray package is a supplementary third disc, a DVD of the movie, for playing in regular, old-fashioned DVD players. Specs are the same as for the 2-disc DVD version. The inclusion of a standard DVD with Blu-ray titles is set to become the norm for Disney, as it encourages consumers to buy the Blu-ray version even if they don’t currently own a Blu-ray player. Quite smart if you plan on upgrading, but beware that there’s no extras on the DVD —they’re all on the two Blu-ray discs.

(Note: Blu-ray.com, among others, has an excellent review geared toward enthusiasts of the format.) 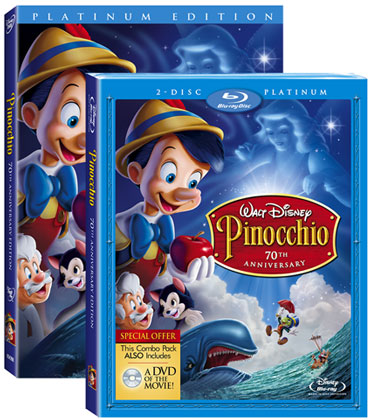 And now, for your enjoyment, three short previews of some of the bonus material after the cut:

Mike is the “very nerdy” writer of The Pixar Blog, a blog dedicated to news about Pixar. He resides near Toronto.