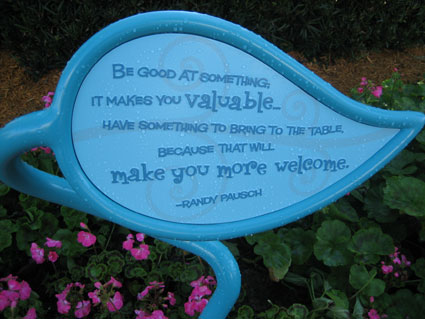 Be good at something; it makes you valuable… have something to bring to the table, because that will make you more welcome. – Randy Pausch

Those words honoring Dr. Randy Pausch adorn the plaque place outside the Mad Tea Cups attraction at Walt Disney World’s Magic Kingdom. Pausch was a Carnegie Mellon professor, Disney Imagineer, and family man known for his “last lecture” given at CMU when faced with the knowledge he had just a few months to live. 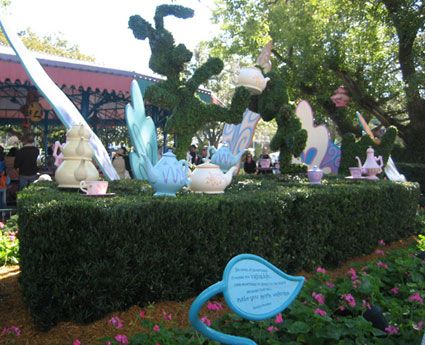 I was worried that the medallion would be out of place, however I think it fits in very well with other decorations in the area. It is located next to a table, so I see how it fits geographically, but I’m confused as to what the message of the Mad Hatter Tea Party has to do with Paucsh’s quote. The story says the attraction meant something to Dr. Pausch, so that will have to do.

I was also thinking about how Disney has incorporated memorials into the park. Typically it’s been through the ‘Cast Credit’ like windows or other in-jokes. I don’t recall anything so directly quoting anyone other than Walt or Roy Disney. Stay tuned to see if it becomes a trend.