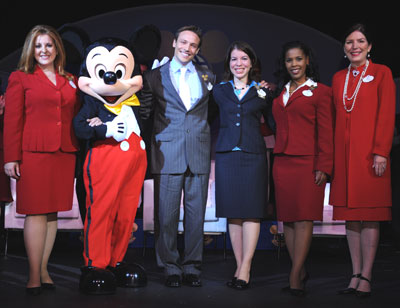 “Being an Ambassador is one of the greatest achievements a Cast Member can attain,” said Meg Crofton president of Walt Disney World Resort. “During the last thirty-seven years, these men and women have represented Disney Cast Members with purpose and grace, and have brought the magic of Walt Disney World to the world at large.”

The 44-year tradition offers a once-in-a-lifetime experience for those who demonstrate passion and knowledge of Disney heritage along with poise and skill. Each year, thousands of Cast Members are invited to participate in this process which starts with informational sessions and ends with a ceremony announcing the new Ambassador team. Individuals named as Ambassadors accept a year-long assignment representing Walt Disney World Resort’s 62,000 Cast Members. Once their term is completed, each Ambassador has the option to return to their prior job or apply for another available position within Walt Disney World Resort.

Serving as a representative of the company and goodwill ambassador to the world brings a tremendous amount of responsibility. Following a two-month training process, the 2009 Ambassador team will start their year with a full schedule and will participate in more than 1,000 local, national and international events. Typical responsibilities include hospital visits and appearances with Disney characters and participating in community outreach events and academic incentive programs. They’ll log tens of thousands of miles traveling to Disney destinations around the globe, host VIPs and dignitaries at Walt Disney World Resort, cut dozens of grand-opening ribbons, share third-shift breakfasts at 1 a.m. and read story books to Central Florida children. For them, these unforgettable experiences will make this year one of the most memorable ones of their lives.

Rosas is an industrial engineer who began her Disney career at Walt Disney World Resort in 2000. Since then she has supported many areas, including the Disney College Program, Disney’s child care centers, Project Tomorrowland, Merchandise, Photo Imaging, Entertainment, Food & Beverage, and most recently, Theme Park Operations. Throughout her career, she has also enjoyed interacting with her fellow Cast Members in activities and organizations such as the Candlelight Cast Choir, Hispanic Organization for Leadership Advancement (HOLA) as well as the Industrial Engineering community service team.

Shoemaker began his Disney career in 1994 while working as a sales host at the local The Disney Store. In 1996, Shoemaker became a Walt Disney World Resort Cast Member and has served on Operations, Sales, Marketing and Merchandise teams over the past 12 years. Some of Shoemaker’s career highlights include roles managing guided tour operations at Magic Kingdom, introducing the Disney heritage to new Cast Members and assisting with the opening of Hong Kong Disneyland.

The great honor of being selected as a Disney Ambassador began during the 10th anniversary of Disneyland when Walt was overwhelmed with requests for appearances and needed a few good surrogates. He selected the first Ambassador in 1964, and the tradition has continued ever since.