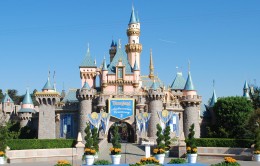 Click through if you care to see a bunch of pictures and read a little about today’s ceremony and the Ambassadors.

Danielle DuBois and Quinn Shurian are the 2009 Disneyland Resort Ambassadors.

They are the 44th team – actually, up until 1994 there was always just one Disneyland Ambassador at a time – part of a tradition that began in 1965 with the Disneyland Tenth Anniversary celebration. 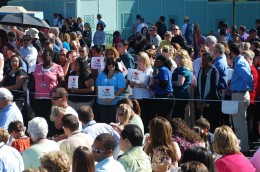 A crowd awaits the ceremony.

Each finalist had their cheering sections of family and friends.

Ed welcomed everyone and David and Liz each shared memories they have made, with David talking about the 25th anniversary celebration at Tokyo Disneyland, and Liz talking about a visit to Germany and learning from Julie Andrews, who served as a special Disneyland Resort 50th Anniversary Ambassador. 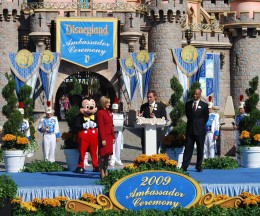 Next, David and Liz introduced the past Ambassadors who were present, each escorted by a character, starting with the 1966 Ambassador and 30 more who have served since.

Then the five finalists were introduced, each escorted by a character. 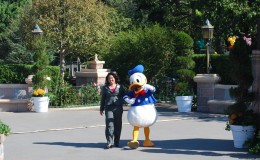 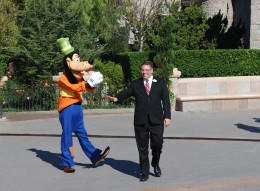 Each of the five finalists shared a memory or two about Disneyland Park.

Finally, it was time to announce who made the 2009 team. 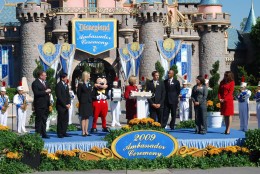 The five finalists, Ed Grier, and 2008 Ambassadors on stage with Mickey 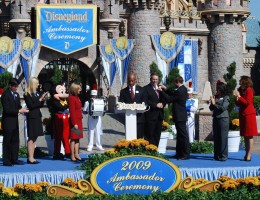 After Danielle was announced, confetti immediately filled the sky of the Castle Forecourt. 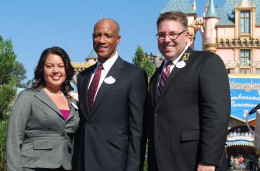 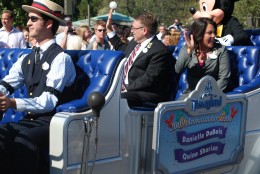 Soon after the confetti settled, Quinn and Danielle joined Mickey Mouse for a cavalcade down Main Street, U.S.A., led by the Disneyland Band.

Danielle is from Imaging, and started as a Cast Member just two years ago.  One of the words she used to describe the interview process for the Ambassador program was “fun” – an attitude, no doubt, that helped her win the role.  Anticipating the ceremony, she had trouble sleeping.  She was “stunned” when she was named, and is looking forward to the new things she’ll be able to see and do as Ambassador.

Quinn has had a longer association with Disney, having worked at The Disney Store in 1991.  He began working at the Resort in 1994 in Attractions, and has been a cast member in Guest Relations, Guest Communication, and most recently has been in Cast Communications as well as an Adventure Guide for Adventures By Disney.  He said he’d been awake since 3am anticipating the 10:30 a.m. ceremony.  He’s most looking forward to being able to bring joy to hospitalized children when he visits with Disney characters. 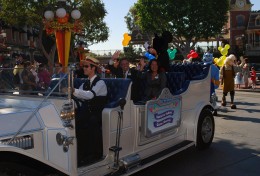 Danielle and Quinn told reporters that they were impressed with the other finalists and honored to be chosen from among that group.

The Ambassador program is clearly like a sorority (and now fraternity, too) as past Ambassadors keep in touch and attend the annual ceremony.  To me, it is something that helps to reinforce the idea that the Disneyland Resort is a place – a magic kingdom – not just a business.