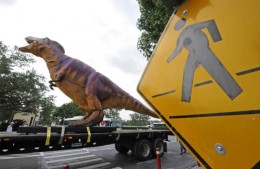 Does that Dinosaur look hungry? He’s going to be housed inside a restaurant with his own name on the door and plenty of human sacrifices to fill his belly on a daily basis. Oh sorry, that’s the wrong memo.

That’s actually a photo from this morning of a two-story tall dinosaur being transported on a flatbed truck into Walt Disney World’s Downtown Disney. The dinosaur will be featured inside a new restaurant, currently under construction, called “T-Rex: a Prehistoric Family Adventure.” Developed by Schussler Creative, Inc. and operated by Landry’s Restaurants, the 600-seat restaurant will feature dinosaurs, waterfalls, bubbling geysers and a fossil dig site. “T-Rex” will open in mid-October at Downtown Disney. As far as I know, no human sacrifices are scheduled.