I was just about to log off for the night when this story came across my radar. A Fox News station in Tampa Bay is back on the old story that the Walt Disney Company is refusing to authenticate what a gentleman claims is the original drawing of Mickey Mouse. Well, duh. It’s obvious to anyone with the slightest knowledge of Mickey’s early films that this isn’t an original Mickey.

I thought we put this one to bed last year, but now I’m so riled up to see it hit the airwaves again that I had to make another attempt at setting the record straight. 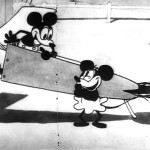 Someone get the local FOX news affiliates on the horn and ask them to do the slightest bit of research on this story about this confused gentlemen Steve Stein who thinks he has an original Mickey Mouse drawing from the 1920s. A simple search for “SteamBoat Willie” (Mickey’s first released animated short film) or “Plane Crazy” (the first film to feature Mickey, but not the first released) will reveal that: Mickey didn’t develop gloves on his hands until later in his life, he didn’t get the famous pie-eyes until the 30s, and the phones in the 20s didn’t use those curly phone cords either. Best of all, Walt wouldn’t have been drawing Mickey Mouse at that point anyway, it was Ub Iwerks who did almost all the drawings of Mickey Mouse for the Disney Brother Studios.

Thing is we already debunked this story in February of 2007 when the same Fox Tampa Television station ran this story. If the current reporter had just Googled “Steve Stein Mickey” my February story is the 4th result. Lazy reporting, exactly what I expect from Fox.