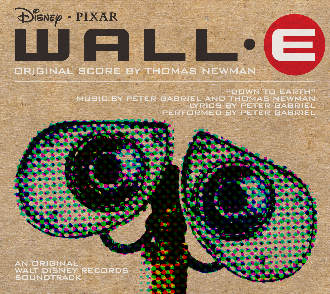 Check out the full track list (although some track names may be spoilers):

Full press release is below the cut:

Academy Award-winning writer-director Andrew Stanton (Finding Nemo, A Bug’s Life) didn’t wait long to ask Finding Nemo collaborator Thomas Newman to compose the music for WALL.E. Stanton described, “The night of the Oscars in 2004 for Nemo, we went out for a celebratory toast at the bar in the middle of the ceremony, and right there I remember saying, ‘Okay, I’ve got this idea, and it involves Hello Dolly and science fiction.’ Wondering if he would still talk to me after that.”

The Hello Dolly reference didn’t scare off Newman – his uncle Lionel was the conductor for the 1969 film. Thomas Newman is member of the film-scoring Newman dynasty (his father and uncle are the legendary composer and conductor Alfred and Lionel Newman respectively, his brother is composer David Newman and cousin is composer/singer/songwriter/recording artist Randy Newman).

After studying at Yale University, Thomas Newman joined the family business and began scoring for film in 1984. It was ten years later that he would became a double Academy Award-nominee with Little Women and The Shawshank Redemption. He has since received 8 nominations for the films American Beauty, Road To Perdition, Finding Nemo, Lemony Snicket’s A Series of Unfortunate Events, and The Good German. He also composed the theme music for the television shows Boston Public and Six Feet Under and the miniseries Angels in America.

Though he has written music for a wide range of films Thomas Newman has never composed for a science fiction film. He brought his own unique style to WALL-E. Stanton describes, “He’s got a very unique style that often involves a lot of overdubs and mixing after he’s recorded the orchestra. And it just allows this fresh palette of sounds to come in.”

“He’s really nailed an identity for not only the movie but for the characters and for the moments,” Stanton continues, “and I can’t imagine it any other way.”

Legendary artist Peter Gabriel had first contacted Andrew Stanton through a mutual friend, Gabriel’s bass player Tony Levin. Gabriel emailed Stanton seeking advice on a different animated feature. The email exchanged ended with Gabriel adding a post script offering “If you ever need a song in one of your movies, just let me know.” Stanton called in the marker, and Gabriel to collaborate with Newman on the song “Down To You,” which Peter performs. In addition, Gabriel co-composed two additional score cues with Newman.

What if mankind had to leave Earth, and somebody forgot to turn the last robot off?

After hundreds of lonely years of doing what he was built for, WALL-E (short for Waste Allocation Load Lifter Earth-Class) discovers a new purpose in life (besides collecting knick-knacks) when he meets a sleek search robot named EVE. EVE comes to realize that WALL.E has inadvertently stumbled upon the key to the planet’s future, and races back to space to report her findings to the humans (who have been eagerly awaiting word that it is safe to return home). Meanwhile, WALL-E chases EVE across the galaxy and sets into motion one of the most exciting and imaginative comedy adventures ever brought to the big screen.

Walt Disney Pictures and Pixar Animation Studios present WALL-E in theaters on June 27, 2008. The WALL-E Original Soundtrack will be in stores on June 24, 2008.