Next to his own most intimate self-concerns, man is most fascinated by creatures of the animal kingdom.
— Walt Disney 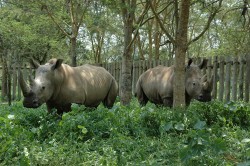 In 2006, two white rhinos, both born at Disney’s Animal Kingdom, became the first-ever to repatriate from the United States to Africa. The two white rhinos joined four others at the Ziwa Sanctuary in Uganda to re-establish a population that became extinct in 1972 due to civil unrest in the region. 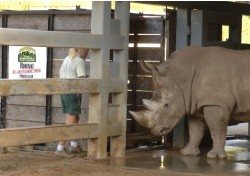 They were then shipped to Uganda and trucked to the Ziwa Sanctuary. They don’t accept crates of Rhinos every day so some ingenuity was used to get them out of the truck and into the transitional pen. 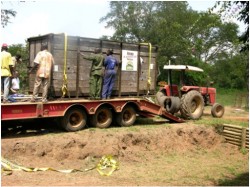 But everything went smoothly and soon the pair were resting quietly in their new home. 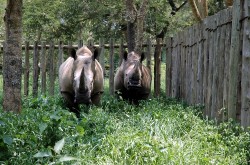 They took a 30 hour journey to the Ziwa Sanctuary in Uganda, Africa on Monday, August 21st with two animal care experts and a veterinarian from Disney’s Animal Kingdom.

Just this year, veterinarians, scientists and animal care experts from Disney’s Animal Kingdom returned to Uganda to follow-up and monitor them.

The goal now is to assist the Uganda Wildlife Authority and Rhino Fund Uganda with the establishment of a breeding facility for rhinos that can be reintroduced to the wild. There are now just over 11,000 white rhinos remaining in the world but very few in the wild.

Disney is justifiably proud of their White Rhino breeding program. So far they’ve had six births in eight years.

Disney World’s collaborative commitment to conservation and rhinos goes beyond this first-ever rhino transfer as well. Additionally, the Disney Wildlife Conservation Fund has supported more than $100,000 in Rhino protection and research projects in partnership with non-profit organizations throughout the world.