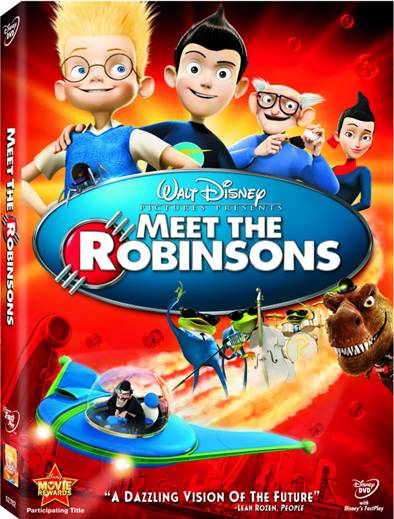 As the holiday season ramps up Meet the Robinsons

is the first movie from Disney to come out on DVD. (The movie is also available in Blu-ray Disc® format.) The film failed to meet box office expectations for Disney’s second CG film (after Chicken Little), but now that it’s on DVD, I hope you’ll give it a second chance.

I enjoyed Meet the Robinsons in theaters the first time around. It was very much what I wanted from ‘G’ rated family film, good heart, beautiful animation, and nary a bathroom joke, but it didn’t generate the kind of fanatic I have to go see that again feeling I get from the best Disney/Pixar films.

In case you missed Meet The Robinsons in the theaters, here’s the jacket summary:

In Meet the Robinsons we join a young inventor named Lewis as he sets off on a time-traveling journey to find the family he never knew. In the fantastical world of 2037, hip-hoppin’ frogs and dogs that wear glasses are as common as talking dinosaurs. In an amazing twist, Lewis discovers that the fate of the future rests in his hands, but he can’t save it alone – he’ll need every bit of help he can get from the the Robinson family.

On viewing the DVD version of the film, I feel very much the same way I did about the film the first time I saw it. Not one of Disney’s classics, but a very good example of story, heart, and artistry come together.

Something I didn’t catch the in the theaters was how good the film’s soundtrack is. Danny Elfman comes through again with a score that really completes the experience.

The DVD comes with all the extras like deleted scenes, music videos, games, and documentary footage. All good stuff for the most part. I particuarly enjoyed the "Inventing The Robinsons" look at the film’s creation. The audio commentary is good, but essentially repeats most of what you learn in the documentaries. The special guest apperance is cute, but doesn’t add anything to the commentary. Which is too bad, because Disney has a history of cute but effective commentary tracks (I’m thinking of Brother Bear here).

What comes through on the DVD is Director Stephen Anderson’s love for the film. It may have required John Lasseter’s 11th hour intervention to get it into theaters, but Anderson’s vision is what shines through. So folks, it’s time to Meet the Robinsons once again!

Read the press release below the cut

“The Pixar Story” audio interview with Lasseter, Catmull, and Iwerks