Get LOST video game on your iPod 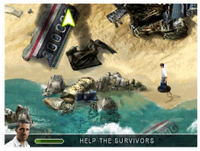 for over a year, but now you can add the LOST video game to your 5g iPod. This is the first iTunes game for Gameloft, normally a mobile phone game developer.

In the LOST game you play the Jack character and interact with other Losties such as Sayid, Kate, and Sawyer. You’ll encounter the major set pieces from the show, the black smoke, the hatch, and other familiar pieces of the island.

It doesn’t sound like this is a part of or a continuation of LOST: The Experience. The ARG that was run during the off season. Which reminds me. I haven’t heard if they’ll be doing a repeat experience this off season.