Fort Wilderness to be demolished 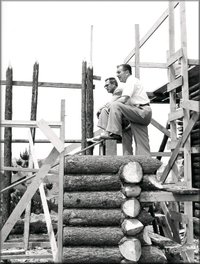 Word is out that Disneyland will begin the demolishing of Fort Wilderness as soon as next week. It’s been closed to the public for 5 years and sadly will head to yesterland permanently shortly.

Here’s a picture of Uncle Walt and my Grandfather Vic Greene surveying the construction of Fort Wilderness. In Walt’s mind he was already seeing families enjoying the feel of the western frontier and life in the fort. I like to think of Walt out there still looking over the various projects going on at the park. Having a tree moved here or there, changing the way something looks because it’s more authentic.

So thanks to all the Imagineers and Cast Members who worked so hard to make Walt’s vision a reality. And now another piece of it slips away.