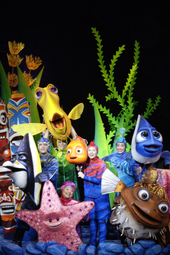 I’m beginning to wonder if the folks at Disney believe they’ve run out of good ideas. It seems everything being added to the parks is based on a Pixar film. Last night was the official premiere of the two new Finding Nemo themed additions – The Seas with Finding Nemo and Friends and Finding Nemo The Musical. LaughingPlace.com was there with coverage in the rain.

Also, as I mentioned previously, the soundtrack for Finding Nemo The Musical is available on iTunes.

previousWall-E Plot Rumors
nextCurrent or Former Employee of The Gap?