WWII veteran Louis Lessure, 93, a First Lieutenant bombardier from the Army Air Corps and Purple Heart recipient, had another chance to honor the United States when he assisted cast members in lowering the flag during the daily flag retreat at Magic Kingdom Park. Lessure… Read More »WWII Veteran Celebrates 61st Wedding Anniversary at the Magic Kingdom on July 4th, 2012 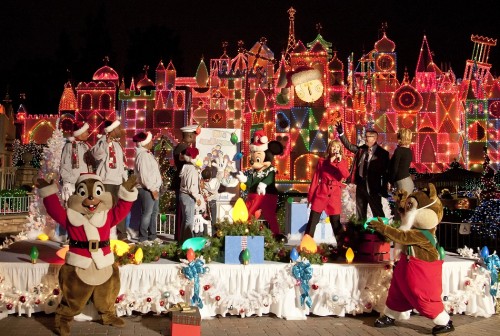 There is no season like Holiday season at Disneyland. The park is known for big kick off moments from Santa installing a giant star atop the Matterhorn (remember that?) to Bob Hope lighting things up with a swing of his golf club. But the trend as of late has been to invite a veteran family from the nation’s armed forces to do the honor.

This year, the Disneyland Resort invited Gunnery Sgt. Derrick Poteat, a veteran of Operation Iraqi Freedom from the 13th Marine Expeditionary Unit’s S-6 communication platoon, and his family to “flip the switch” on more than 300,000 holiday lights blanketing “it’s a small world” Holiday, transforming the popular attraction into a visual wonderland and officially launching the holiday season at the Disneyland Resort.

The ceremony, presented by the attraction’s sponsor, Sylvania, honored Poteat and his family for the contributions they have made to our country. Poteat, who enlisted in the Marine Corps in 1996, has completed three tours and recently returned from the latest, a seven-month deployment in the Middle East. He was joined by his three children, nephew, niece and wife, Clarice, an advisor to the 13th Marine Expeditionary Unit’s family readiness team, for a day of play at the Disneyland Resort followed by this special honor. Video of the ceremony and more is below the jump: