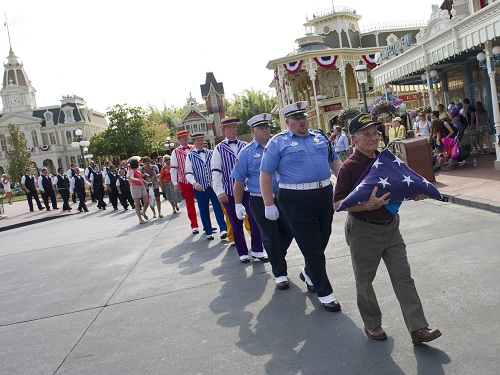 WWII veteran Louis Lessure, 93, a First Lieutenant bombardier from the Army Air Corps and Purple Heart recipient, had another chance to honor the United States when he assisted cast members in lowering the flag during the daily flag retreat at Magic Kingdom Park. Lessure and his wife Sally, 85, celebrate their 61st wedding anniversary on July 4th at Walt Disney World Resort.

To celebrate their love of their country, and each other, the Lessures of Cincinnati, Ohio, married on July 4, 1951. WWII veteran Louis, 93, and his wife Sally, 85, say neither realized the irony of tying the knot on Independence Day.