Waaalll-eee (A review of Disney/Pixar’s Wall-E)

Yesterday we took my daughter to see Wall-E. I wasn’t sure if it was going to be a little intense for a 2 year old, so we watched a few of the trailers and vignettes of our robotic friend online before we left. My daughter… Read More »Waaalll-eee (A review of Disney/Pixar’s Wall-E)

A little robot called WALL-E rolls its way into movie theaters tonight at midnight and then into the hearts of millions. This post will be a clearing house for all the news, reviews, and great links I can find on Pixar’s feature animated hit WALL-E.… Read More »WALL-E Reviews and Mega Link Collection 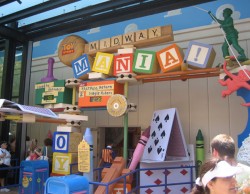 Toy Story Midway Mania is a new 4-D video game opening soon at Disneyland and Walt Disney World resorts. Guests ride through a series of Midway games, each with a different concept related to a Toy Story character, and use a unique ‘pull-string cannon’ to launch various projectiles at various targets and easter eggs in order to score points and be awarded a virtual prize.

What puts the Disney touch on this game is the great design of the queue and loading area and the amazing integration of 3-D and 4-D (real world) effects to raise the experience above something you could otherwise find at home in your living room. That and the addition of the characters from Pixar’s popular Toy Story series.

Early WALL-E Reviews are In for Pixar

WALL-E screenings are beginning to happen with one of the first being the wrap party for Pixar employees. Obviously, there are some slight spoilers, if you want to form your own opinion. Here’s DoomMunky at the Quarter to Three Game Forums who saw WALL-E at… Read More »Early WALL-E Reviews are In for Pixar

Sorry I’m getting this out a little late, Losties, it’s because I had a big big day yesterday! But don’t worry, my partying can’t stop my Lost-love. I got home at midnight (after a pre-screening of Prince Caspian) and immediately sat down to watch Lost. Alone. My dear husband, the false fan, couldn’t stay up that late. So, against my previous warnings, I watched Lost before bed. I dreamed of Prince Caspian and Sawyer running through the jungle. So, I’ll try to stay on task…

Johnny and the Sprites ready to visit your house

Johnny and the Sprites is a wonderful show on The Disney Channel’s Playhouse Disney morning line up that works to teach children 2-5 some important lessons, while providing entertainment from some of the best talent on Broadway. It’s a recipe that bakes up some of the best magic on The Disney Channel in years. The first season is now available on DVD so you can watch this show with your children at any time.

The DVD features two bonus features. One a magical sing-a-long segment and the other the original shorts that served as interstitials on the Disney Channel and proved the popularity of the show. There are lots of wonderful gems just in the shorts.

Read More »Johnny and the Sprites ready to visit your house

Lost: The Other Woman

I should have known after two very full episodes (Kate’s Eggtown and Desmond’s The Constant) we wouldn’t be getting very much from this episode. It’s hard for me to get excited about Juliet but I think they are really trying to show she’s likable and make us feel bad for her. I always felt Juliet was the “other woman” anyway, among my tight ensemble cast of Losties, but this episode shows us anther part of her Other-ness.

Let’s start with Juliet since we’re already there, shall we?
The scene opens with Juliet discussing her arrival (to where?) with a therapist. I think they were trying to trick us to thinking that she was one of the Six. But I knew better, this was an honest to goodness flashback to when Juliet first arrived on the Island.

Read More »Lost: The Other Woman