While the presentation is not as slick as the recent Google Glass idea, the concepts behind “Touché” by Disney Research Pittsburgh could be equally as revolutionary. In fact, the two products working together make what was science fiction now very real. Here’s how they describe… Read More »Disney Research Reveals Revolutionary Concept

Be good at something; it makes you valuable… have something to bring to the table, because that will make you more welcome. – Randy Pausch Those words honoring Dr. Randy Pausch adorn the plaque place outside the Mad Tea Cups attraction at Walt Disney World’s… Read More »Dr. Randy Pausch Medallion at Magic Kingdom

The Walt Disney Company has announced the creation of the Disney Memorial Pausch Fellowship at Carnegie Mellon University in recognition of the passion and energy Dr. Randy Pausch brought to his work at both Carnegie Mellon and Walt Disney Imagineering. Pausch is best known for his life-affirming “Last Lecture,” which he delivered to his students and colleagues a few weeks after learning he had just months to live. Intended as a roadmap for his three young children, the lecture included his insights on finding the good in other people, working hard to overcome obstacles and living generously.

“Randy Pausch lived his life inspiring his students, colleagues and co-workers. Now, the vitality and energy he brought to his classroom lives on and serves as an inspiration to millions of people he never had the chance to meet,” said Disney President and CEO Bob Iger. “We are proud to honor Randy’s passion by supporting the innovators and dreamers of tomorrow with these fellowships.” 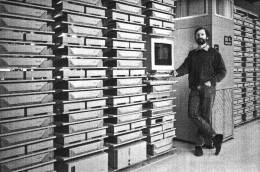 The Walt Disney Company knew they had hit upon a good thing when they invited Dr. Randy Pausch to join their team at Walt Disney Imagineering to help build their virtual reality program. Yes, that’s the same professor who recently died after fighting cancer and… Read More »Disney develops close ties with Carnegie Mellon University

When I first saw the video of Randy Pausch’s “Last Lecture” entitled Really Achieving Your Childhood Dreams, I was doubly impacted, not just because we shared a dream, become an Imagineer, but because his work has made an incredible impact at the non-profit I work… Read More »Randy Pausch – Disney Imagineer, CMU ETC founder, and “Last Lecture” professor has died

Randy Pausch – The Last Lecture from a Disney Imagineer

There were a lot of things I wanted to talk about tonight, but none of that is as important as you finding 70 minutes of time to watch this video or $14 to buy this book and learn a few important lessons about life and… Read More »Randy Pausch – The Last Lecture from a Disney Imagineer