From the Disney Parks blog we get Disneyland’s official look at the past year. See if you can spot, a reopened “it’s a small world”, “Celebrate! A Street Party,” Mickey’s Fun Wheel, Bibbidi Bobbidi Boutique in Fantasyland, the fourth annual Food and Wine Festival, Summer… Read More »Disneyland Year In Review Video

The Food & Wine Festival returns to EPCOT this year September 25 – November 8 for the 14th time. As with last year the even is slightly downsized from the height of 30+ countries, but the flavor and experience is all there. During the six-week event, park guests can taste fine cuisine and wines from top “foodie” cities of the world and enjoy entertainment from musical acts that will bring back memories of yesteryear.

I personally hope that this year’s festival will include more of a street food element. It is a trend in food service right now, and it works well with the ‘foodie’ cities theme they have this year. So I’m keeping my fingers crossed.

The Walt Disney Company is rolling out the red carpet and a whole lot more for its fans at the inaugural D23 Expo. They’ve just released the Event Schedule with lots of great details for this amazing Disney Fan event. Plan to be in Anaheim September 10-13 to check everything out.

Exciting details about the activities and events planned for the four days of Disney’s inaugural D23 EXPO have just been announced. There is so much to see you’re going to have to plan carefully. The D23 EXPO is open to the public. Tickets for individual days or the full four days of this Ultimate Disney Fan Event are available at the website. The D23 EXPO will offer guests the chance to get sneak peeks of upcoming Disney movies like The Princess and the Frog, TRON: Legacy, Prince of Persia: The Sands of Time, Rapunzel, Disney’s A Christmas Carol, Tim Burton’s Alice in Wonderland and many others. The D23 EXPO also will present the U.S. premiere screenings of Toy Story and Toy Story 2 in Disney Digital 3D™. More than that, the D23 EXPO will present several classic movies on the big screen, including the original Tron, Sleeping Beauty, The Shaggy Dog, Darby O’Gill and the Little People, along with other exciting screening events. The ABC House Screening Room will present screenings of new television entertainment, including ABC’s vibrant new fall schedule.

The D23 EXPO will offer fascinating explorations of the past, present and future of Disney. Throughout the four days, scores of special panels and presentations will bring new insight into Disney history, let guests go “behind the magic” of Disney theme-park attractions and movies, and get fans up close and personal with the Disney legacy of unforgettable entertainment.

A giant show floor filled with incredible pavilions and interactive areas assembles the entire world of Disney under one roof. From Disney’s global theme parks to the Company’s environmental initiatives, the show floor includes a collector’s area, a gathering of Disney licensees, an eight-room “home” showcasing an amazing array of Disney merchandise, and new technologies being developed by Walt Disney Imagineering. The show floor is the heart of the D23 EXPO. It will also be home to the “ABC House Screening Room,” a sign-up area for the “Lost University,” and kid-friendly play areas that make the D23 EXPO an exciting event for all ages of Disney fans.

“Treasures of the Walt Disney Archives”

The legendary Walt Disney Archives will assemble a never-before-seen collection of more than 100 props, costumes and one-of-a-kind items from more than eight decades of Disney creativity. For the first time ever, the Archives also will present a retrospective of props and costumes from the classic “Captain EO” attraction in which Michael Jackson thrilled theme-park audiences in 3D.

The 4,000-seat Anaheim Convention Center Arena will be home to spectacular presentations throughout the four days of the D23 EXPO. Disney President and CEO Bob Iger will kick off the entire event with an unforgettable presentation that includes a 30-minute glimpse at the upcoming animated feature The Princess and the Frog and a live performance by its vocal star, Anika Noni Rose. Other Arena presentations will incorporate surprise celebrity appearances as D23 EXPO guests learn about the future of ABC, Disney movies, theme parks, animation and more.

Disney Consumer Products will give D23 EXPO guests the chance to explore a host of activities for the entire family, including a Disney Creativity Center hosted by Crayola, the Disney Princess Storytime and Royal Manners event, the Baby Einstein World of Discovery Center, and a magnificent live LEGO building event in which Master Builders will invite guests to join them to construct a life-sized mural of Disney characters, paying homage to the innovation of Disney and LEGO. There will be appearances by best-selling authors, fine artists, and toy designers. There will also be a series of fashion shows featuring the latest styles from Disney Couture, Disney Couture kids and the Wizards of Waverly Place collection. Guests will have the opportunity to tour the first-ever Disney Dream Home and to go “behind the fairy tale” at the Disney Fairy Tale Weddings showcase.

Schedule Highlights are below the jump:

Yesterday I was honored to be a guest on the WDW Today podcast. It’s the middle of August and Summer is drawing to an unofficial close as kids head back to school so we discussed, what else, the biggest news stories of the year. A… Read More »The Disney Blog guests on WDW Today Podcast

Walt Disney World has released the prices and information about the 2010 Disney Dining Plans: 2010 Dining Plan PDF It doesn’t look like much has changed, except for the price per person, including a seasonal change. The Quick Service Dining Plan: Adults (Ages 10+) :… Read More »Disney Releases 2010 Dining Plan Info 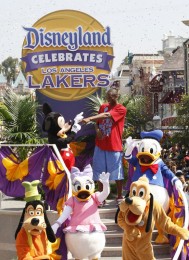 Celebrating the best in basketball, the Disneyland Resort saluted the 2009 World Champion Los Angeles Lakers today with a victory parade down Main Street U.S.A, for Kobe Bryant, MVP of the recent NBA Finals. Kobe smiled and waved to fans as he rode on a float with Mickey Mouse and other characters.

“It’s like a dream come true to be here and celebrate at Disneyland, coming down Main Street U.S.A. with all the fans cheering,” Bryant said after the parade. “It’s a tremendous honor to represent my team.”

As part of the ‘Fairytale Series’ the presidents of the two Resorts, Ed Grier at Disneyland and Meg Crofton at Walt Disney World, made a friendly wager on the NBA Finals. On Thursday, Meg Crofton fulfilled her pledge by donning a pair of Lakers’ purple and gold Mickey Mouse ears and walking down Main Street, U.S.A., in the Magic Kingdom at Walt Disney World. I’m hoping a photo of that will turn up somewhere.

Each of the Resorts also turned the lights of their respective castles to the team colors of the Lakers and the Magic, in celebration of the historic pairing. Sleeping Beauty Castle at Disneyland park was glowing with Lakers purple and gold during the NBA Finals and will stay that way through Thursday night.

“I heard there was a little competition with Disneyland and Disney World and we won,” Kobe Bryant said, “so our colors are staying up a little bit longer.” 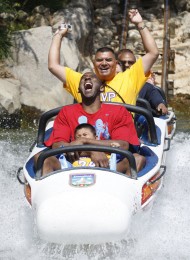 Two of the many Lakers fans at Disneyland on Thursday were selected to ride the Matterhorn Bobsleds with Bryant after the parade. David Guerrero and his son Jonathan, 4, of Pomona, are Annual Passport holders and they came to Disneyland in their team jerseys to celebrate the Lakers’ World Championship.

“They just picked us out of the crowd and said, ‘Do you want to ride the Matterhorn with Kobe?’ I’m shaking, this is so exciting,” David Guerrero said as Jonathan jumped up and down. “In Southern California, being a Disney fan and a Lakers fan, it just goes together and that’s why we wanted to be here today.”

A short video of Kobe Bryant at Disneyland is below the cut: