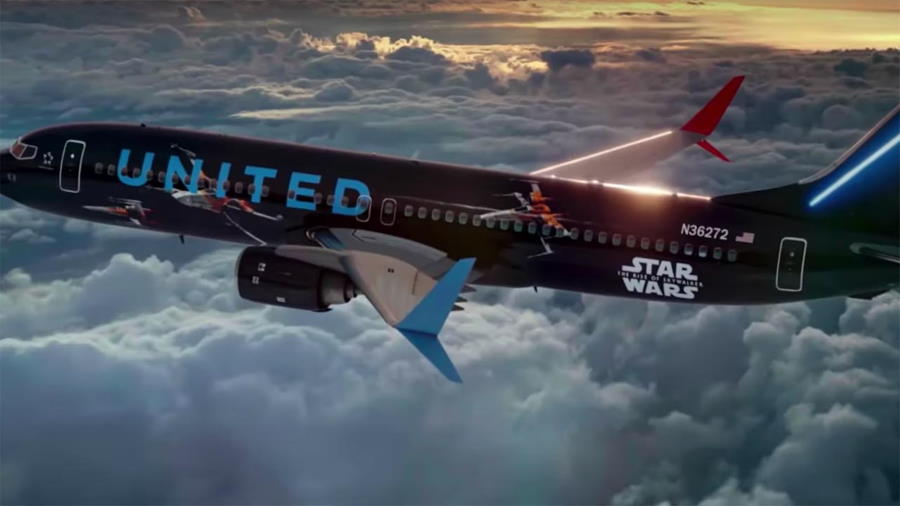 Passengers boarding a flight to Orlando were treated to a special treat from a galaxy far, far away as the United Airlines jet plane themed to Star Wars: The Rise of Skywalker, the last film in the the Skywalker saga, was their aircraft.

The special Star Wars-themed Boeing 737-800 has a Star Wars look on the outside in with special features on the interior. Outside, a special paint job features the Star Wars galaxy and images of many iconic Star Wars spacecrafts, including the x-Wing and TIE-fighters.

On the tail of the plane, there are two lightsabers crossed against a black backdrop. They represent the two sides of the Force, the light and the dark.

Inside passengers sit on the side of The Resistance of the First Order with special colors and emblems on the seat backs. The safety video also features characters from the new film.

Take a special sneak peek inside and outside the plane as it visited Orlando for the first time:

Guests on the inaugural flight to Orlando were greeted warmly by Walt Disney World Ambassador Marilyn West and by a pair of Stormtroopers. Passengers also received a surprise gift package including a commemorative pin. All guests who board this special airplane in December will receive the pins to celebrate the movie’s release.