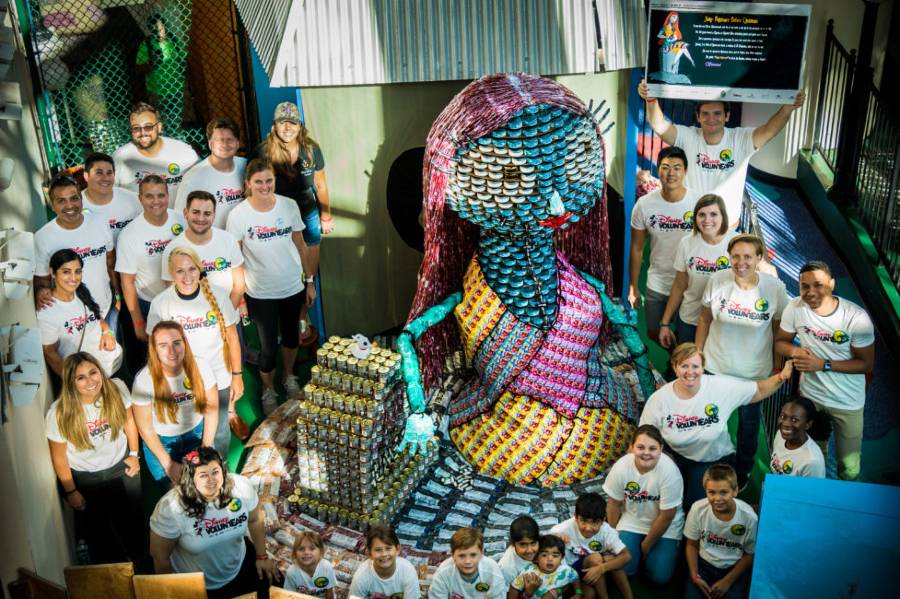 Disney VoluntEARs have once again sent a team to the Orlando Science Center to make a larger-than-live food sculpture at the 2019 CANstruction Orlando event. The cast members come from design, architect, and engineering roles and they have to put all those skills to work to create a sculpture meeting this year’s themed – Spooky Science.

Disney’s team choose to make a model of Sally, the infamous ragdoll from “Tim Burton’s The Nightmare Before Christmas.”

Celebrating its 26th anniversary this year, CANstruction Orlando is an annual competition hosted by Central Florida’s architectural and engineering community. The event benefits Second Harvest Food Bank, the recipient of all reusable food items once the competition is over. Each year, Disney VoluntEARS draw their ideas from iconic Disney parks, movies and more in order to build their CANstructions. This year’s sculpture of Sally was brought to life by more than 12,000 food items.

“’Tim Burton’s The Nightmare Before Christmas’ and Sally are the perfect themes for this time of year,” said Mike Piatek, director of architecture and facilities engineering for Walt Disney World Resort. “By choosing this CANstruction sculpture, Disney Cast Members hope to inspire the next generation of engineers, while also supporting those in need in our community.”

Along with Disney, organizations throughout the community participated in this year’s CANstruction event. After the competition, the nonperishable food is donated to Second Harvest Food Bank of Central Florida.

“Events like CANstruction and those who participate, including Disney VoluntEARS, not only donate nonperishable food items, but also raise awareness for the individuals we serve throughout Central Florida,” said Dave Krepcho, President and CEO of Second Harvest Food Bank of Central Florida. “We appreciate the support of all who participated because they are inspiring and engaging the community in creative ways to help us reach our vision of ending hunger.”

Walt Disney World Resort and its Cast Members have supported Second Harvest Food Bank for the past 27 years, including distributing unused, prepared food from restaurants and conventions through the Disney Harvest Program. Since 2012, Disney VoluntEARS have donated thousands and thousands of food items through the annual CANstruction Orlando events.

If you want to head down to see the CANtastic sculptures yourself, they’re on display through November 10.

previousAvatar is coming to Disney+ when streaming service debuts.
nextMickey Mouse Refrigerator brings Euro-style to US via SMEG and Disney