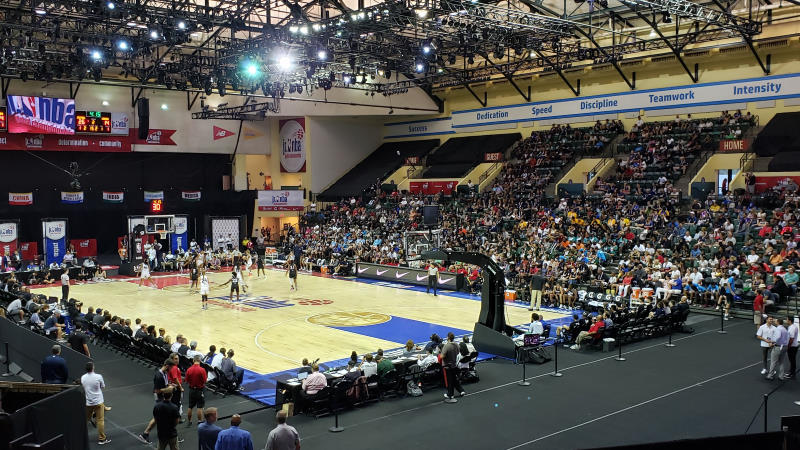 The ESPN Wide World of Sports complex played host to the Jr NBA Global Championship this last week crowning two teams after of a global list of the top 32 teams from around the globe. This is the second year of the event and the second year it was held at ESPN Wide World of Sports Complex. It marks a growing partnership between Disney and the NBA.

We had the opportunity to talk with Dwyane Wade, Jr. NBA Global Ambassador, and Mark Tatum, Deputy NBA Commissioner ahead of the two final global championship games:

More highlights from the skills night slam dunk contest including the winning dunk over three people.

A total of 32 teams and more than 350 players representing 40 countries participated. The six-day global, youth basketball tournament showcased the top 13-14 boys’ and girls’ teams from the United States and around the world, including countries such as India, Australia, China and Mexico.

Teams were divided into U.S. and international brackets before competing for Sunday’s world championships. A total of 92 games were played during the week. The Jr. NBA week also included off-court activities such as life-skills education, NBA Cares community service projects, and leadership development programs with current and former NBA and WNBA players and coaches.

On Sunday the US. Central girls team took on Team Canada to repeat as Jr. NBA Global Champions. The boys division came down to the US West team took on the previously unbeaten Team Africa. In the end the US West boys claimed the championship trophy.

The event took place mostly in the Field House. I often think of ESPN WWOS as Walt Disney World’s 5th gate. Thousands of athletes and their families visit every month. I wish Disney luck finding more events and teams to train and play at the facility. I also hope they’re able to add some facilities that are open to the general public to participate in the ESPN lifestyle. I think there’s a big opportunity to continue the synergy between the brands.

Congratulations to all the youth who made it to Orlando for the Jr. NBA event. You’ve already had a lot of success at the age of 13 or 14 and there’s undoubtedly more in front of you.