Christina Hendricks joined the cast of Pixar’s Toy Story 4 playing a character with a Godfather like role – the talking doll Gabby Gabby. We first encounter Gabby Gabby inside the antique store that Woody and Forky visit on their way back to Bonnie’s RV. The events inside that store set Woody off on a whole new adventure.

Like the Godfather, Gabby Gabby has the ventriloquist dummies as henchmen, it turns out there is a weird connection to Hendricks herself that the producers didn’t know when they were interviewing her for the role as Gabby Gabby. When they showed her the concept art with the dummies, Hendricks saw an immediate connection.

“I thought you guys [Toy Story 4 producers] had done like weird background research on me. Because I actually have a ventriloquist doll in my house that I wanted my entire life,” said Hendricks. “Every year I would ask my parents for this Charlie McCarthy ventriloquist doll and they’re like you’re weird. We’re giving you a baby doll. You’re never going to get it. And then as an adult, I finally got one. But I was like, how did you guys get in my mind?”

Known for finding the power and vulnerability in her characters, Hendricks found a lot dig into when she tackled the character of Gabby Gabby.

“I think that every woman has that vulnerability and strength within her. So I sort of approached probably everything I do a little bit in that way,” Hendricks said. “That’s maybe why you guys called me. I don’t know. But I just think like they were saying earlier, all of the characters in this movie are so well rounded and that’s such a sweet thing about this character is she’s not just one thing. She’s got this strength, even though she’s a baby doll. So it was a joy to sort of bring all those sides to her.”

Hendricks also talked about how her character of Gabby Gabby becomes the film’s biggest twist, “No, she’s so lovely. I like that, I think when children see this movie, she comes across as sort of like the villain at first, then you realize that she’s coming from a very loving place. I think that’s important to sort of say maybe you don’t like someone at first. But how did they get there and why are they there and understanding their story. I think she’s very special in that way. Then she sort of gets embraced by the group and then it’s about
support.” 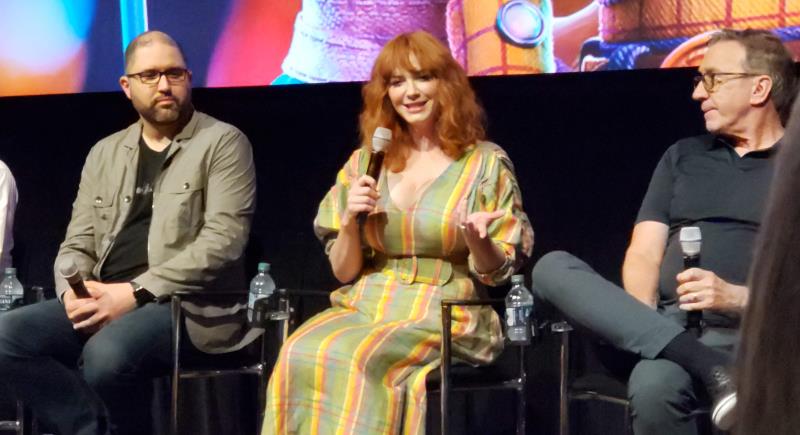 On the lesson she wants little girls to get from Gabby Gabby, Hendricks says “I think that ultimately, you have to listen to everyone’s full story before you make a judgment about them. And to hopefully not make a judgment about them. I think that’s the lovely thing that she brings to this part of the story is that everyone comes from a place and it’s what made them who they are and you need to listen to that before you can fully understand them.”

Pixar’s Toy Story 4 is in theaters now. If you’ve seen it, tell us what you thought of the Gabby Gabby character?