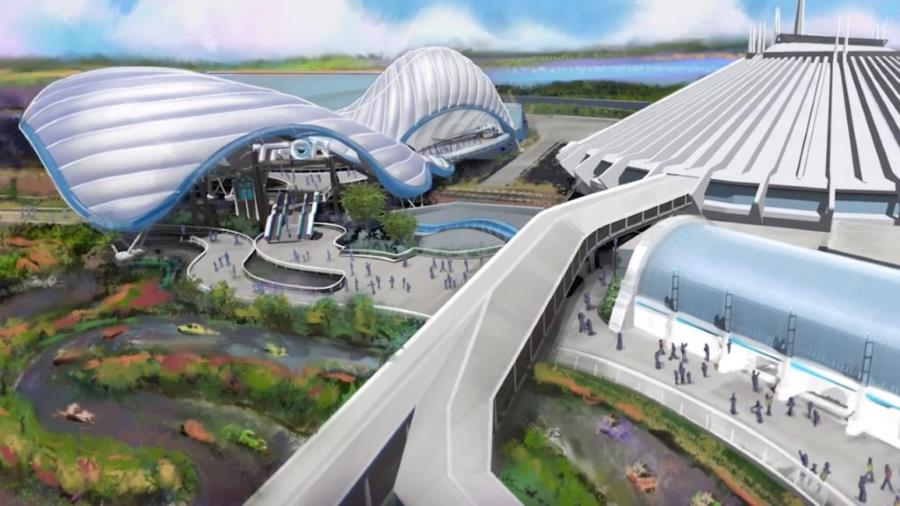 As the Magic Kingdom prepares to add its first big new attraction since “Seven Dwarfs Mine Train” it’s making over a big section of Tomorrowland. When the work is done there will be a slightly shorter Tomorrowland Speedway and an entirely new roller coaster attraction themed to the terrific TRON franchise.

This week marked a major milestone in the construction of the new TRON-themed coaster — the first steel support columns have been installed. These steel columns serve as the framework that will support the actual roller coaster track.

Disney’s Imagineering design team celebrated the progress with the release of a video checking in on the progress that’s already been made.

You may remember a few weeks ago when cast members were able to sign one of the support pillars. That column has also been added.

The as-yet-unnamed TRON-themed coaster is based on the Shanghai Disneyland guest favorite TRON Lightcycle Power Run. The ride features two-wheeled lightcycles that guests ride through the computer world in a thrilling race across the digital frontier.

The TRON attraction is set to open at Magic Kingdom Park in time for Walt Disney World’s 50th anniversary in 2021. Do you plan to make a trip for your own visit to the world of TRON?

1 thought on “VIDEO: The TRON coaster reaches a major milestone at Magic Kingdom”

previousRobert Downey Jr. and Jon Favreau among those to be honored as Disney Legends
nextEpcot’s Eat to the Beat concert series 2019 acts