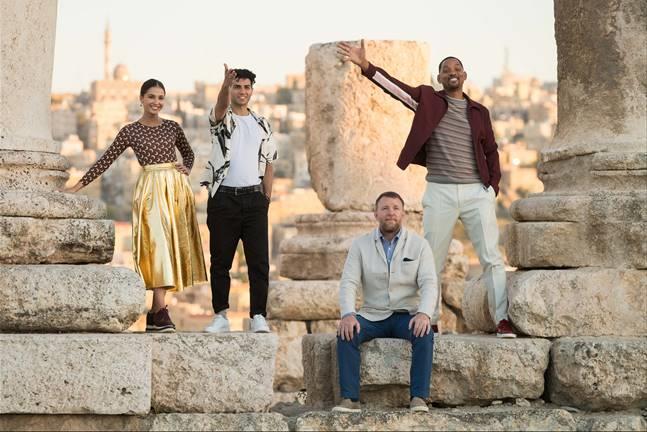 The cast of Disney’s Aladdin returned to Jordan, where much of the movie was filmed, to do some press and debut the movie at a VIP screening with the Anman Citadel as aa backdrop. Stars Will Smith Mena Massoud, and Naomi Scott were joined by Director Guy Ritchie in these photos from Jordan. The “Aladdin” production was in Jordan for several weeks in November 2017 to capture the natural beauty of the stunning desert vistas for the big screen. 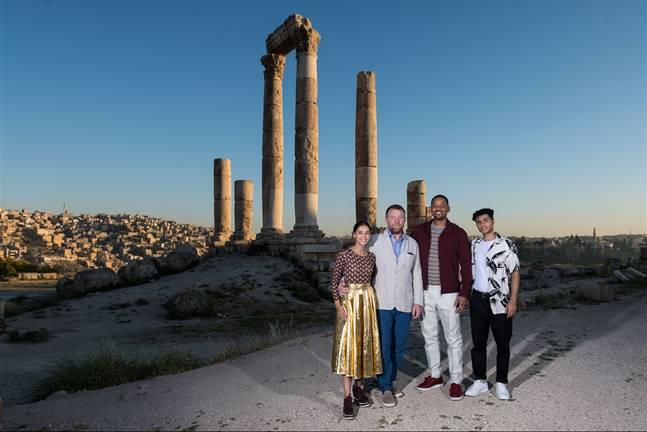 With its domestic release on May 24 just 10 days away now, Disney has also shared a new trailer and featurette for the movie.

In the first, Aladdin has stumbled upon an opportunity.

The featurette features Will Smith talking about what he connected with in the movie.

The casting of Will Smith as The Genie is the make or break move of the film.

Finding the right actor to play the Genie, the shape‐shifting blue entity confined to an oil lamp, was crucial, and the bar had been set high with Robin Williams. The first real celebrity performance of an animated character, and possibly one of the best ever, Williams’ work was universally acclaimed, but the filmmakers were not looking to recreate his iconic performance. 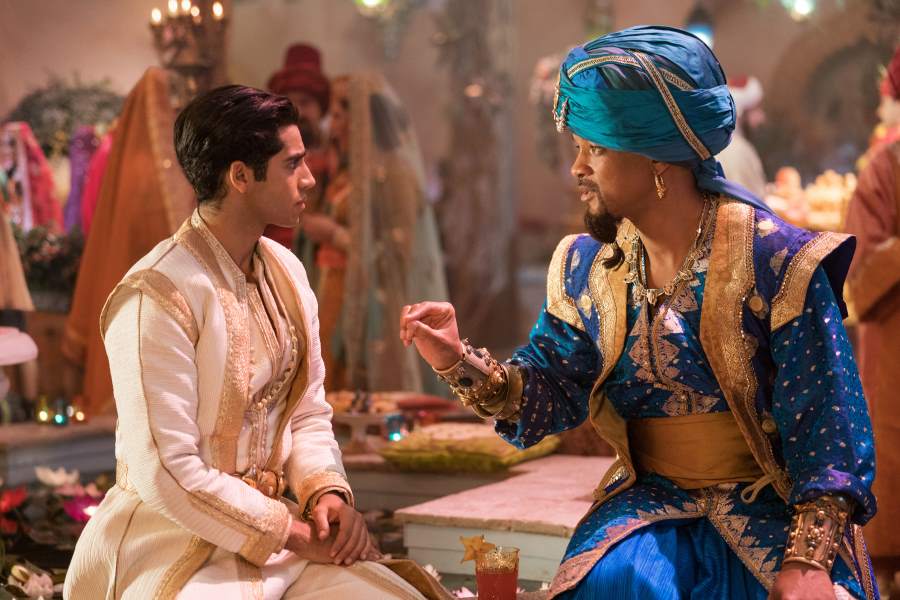 It was the energy of the performance that needed to be different, but who could bring an energy that would feel akin to the spirit of the original yet be distinctly his own? Disney needed an actor with tremendous range…someone who could play funny and dramatic, who could be emotional, who could sing and entertain…someone like Will Smith, who it turns out was interested.

The actor, producer, comedian and rapper with credits that include “Ali,” “Men in Black” and “Independence Day” – and who has been nominated for five Golden Globe Awards and two Oscars – liked the idea of reinventing the character and making it his own. But it wasn’t until he met with Guy Ritchie that the prospect became real.

“Once we sat down and he explained that he wanted to make the story more authentic and put it in more of a realistic space and bring in occasional pop culture references, I was in,” says Smith. “Guy’s style is somewhere between action and music, and he wanted to concentrate on aspects of the characters that were different from what you would expect in a Disney film and were unique, clever and fun.”

“Will is a tremendously generous artist in every sense,” says Ritchie. “A lot of my job was encouraging Will to just be Will, but he was also very open to new ideas. We would riff on different ideas and found a rhythm between us where it quickly became apparent which ideas were going to float and which ones would sink.”

They both shared the same vision for the Genie character. “The Genie is both a trickster and a mentor, and he is trying to guide Aladdin to the truth of the greatness that’s already within him,” says Smith, “and I love that idea…to be yourself. For me at this point in my life, I love playing a character that is trying to help a young boy become a man.”

Smith continues, “Robin Williams did an absolutely brilliant job on the film, and it’s such a memorable performance, and for me, when I’m looking at a role—especially one that has nostalgic value to it—I ask myself, ‘Is there any meat left on the bone? What is it that I could add to the role?’ One of the major aspects was going from animation to live action and the idea of being able to pay homage to the original character and to honor Robin, while at the same time giving a new voice to modernize the Genie…there was the potential to create something that did both of those things.”

“This was the first project since ‘The Fresh Prince of Bel‐Air’ that has used so many of the things that I like to do,” says Smith. “In this film I get to sing and dance and rap and perform and do comedy and drama, so it was a great opportunity to use myself fully as an artist.”

Smith is a long way from the Fresh Prince as The Genie, but I wonder if they can resist putting in a cameo or even a few steps of the Carlton dance. 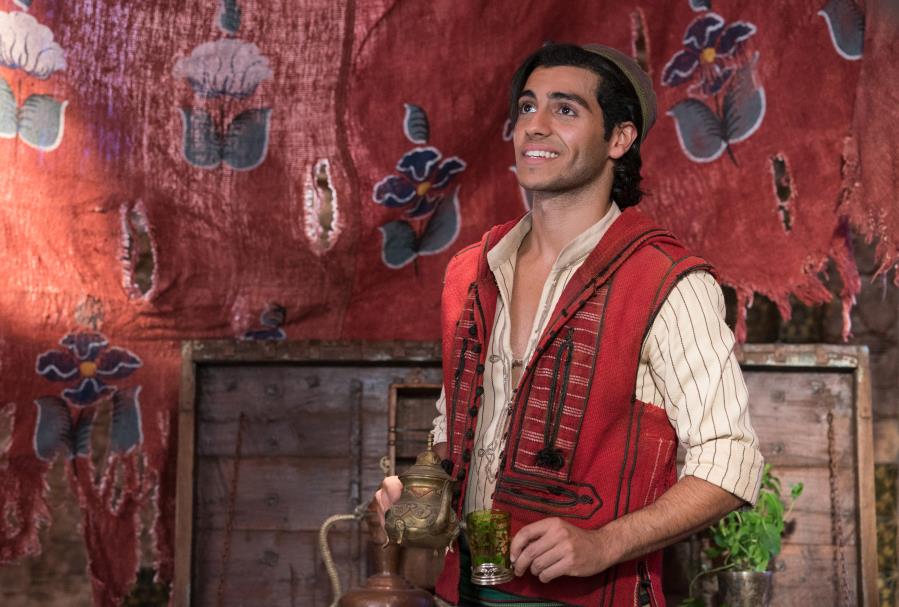 A thrilling and vibrant live-action adaptation of Disney’s 1992 classic, “Aladdin” is the exciting tale of the charming street rat Aladdin, the courageous and self-determined Princess Jasmine and the Genie who may be the key to their future. Directed by Guy Ritchie (“Sherlock Holmes,” “The Man from U.N.C.L.E.”), who brings his singular flair for fast-paced, visceral action to the fictitious port city of Agrabah in Arabia, “Aladdin” is written by John August (“Dark Shadows,” “Big Fish”) and Ritchie based on Disney’s “Aladdin.” The film stars Will Smith (“Ali,” “Men in Black”) as the larger-than-life Genie; Mena Massoud (“Tom Clancy’s Jack Ryan”) as the lovable street urchin Aladdin; Naomi Scott (“Power Rangers”) as Jasmine, the beautiful, self-determined princess; Marwan Kenzari (“Murder on the Orient Express”) as Jafar, the powerful sorcerer; Navid Negahban (“Legion”) as the Sultan concerned with his daughter’s future; Nasim Pedrad (“Saturday Night Live”) as Dalia, Princess Jasmine’s free-spirited best friend and confidante; and Billy Magnussen (“Maniac”) as the handsome and arrogant suitor Prince Anders. The film, which was shot on practical stages in London and on location amidst the stunning desert vistas of Jordan, has a talented creative team helping to bring Agrabah to life, including: director of photography Alan Stewart (“The Commuter”), production designer Gemma Jackson (“Game of Thrones”) and costume designer Michael Wilkinson (“American Hustle”).

The 1992 animated film starred Robin Williams and featured such memorable songs as the Oscar-winning “A Whole New World” and “Friend like Me.” The film grossed more than $502 million at the global box office, which led to successful stage productions on Broadway and abroad as well as a North American touring company.