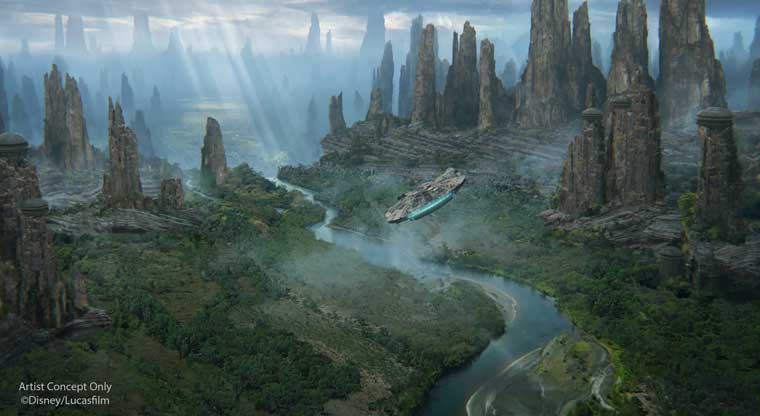 If you’re looking for a way to beat the crowds to Star Wars: Galaxy’s Edge after it opens at Disney’s Hollywood Studios, you should plan on booking at stay at one of Walt Disney World’s resort hotels to take advantage of the Extra Magic Hours benefit. That will get you into the land ahead of guests who aren’t staying at one of Disney’s approved resorts.

Starting September 1, 2019, guests at Disney resorts and select partner resorts will be able to enter Disney’s Hollywood Studios for bonus early Extra Magic Hours between 6am and 9am. Attraction choice will be limited, but will include Star Wars: Galaxy’s Edge and Millennium Falcon: Smuggler’s Run. Toy Story Land attractions are also on the list. This special early entry benefit will run through at least November 2, 2019.

The first three days of Star Wars: Galaxy’s Edge on August 29, 30 & 31, it will open with the park at the special early hour of 6AM. Lines will form early. No word if guest time in the land will be limited, but it does look like entry at Disney’s Hollywood Studios won’t require a reservation like the first few weeks at Disneyland will.

In an effort to spread out crowds, bonus early Extra Magic Hours will also be offered at Magic Kingdom and Disney’s Animal Kingdom:

Epcot’s schedule of Extra Magic Hours schedule will be less frequent. So check with your travel agent or Disney’s calendar.

As usual, you have to have both a valid resort stay and theme park admission to take advantage of Extra Magic Hours. Fastpass+ are not available during Extra Magic Hours. We don’t yet know if Fastpass will be available for day guests once Star Wars: Galaxy’s Edge opens. We’ve heard that Walt Disney World will follow Disneyland’s lead and not offer it, at least during the initial few weeks.

Let The Disney Blog’s own Disney authorized Travel Planner help you book your perfect vacation before, during or after the initial opening of Star Wars: Galaxy’s Edge. Stacey Frost at Pixie Vacations can provide you a free no-obligation quote for any Disney resort and partner resorts in the Orlando area. Your use of Stacey to help book your Disney travel will save you hassle and will help support The Disney Blog. Thank you.

If you would like more information on booking a Walt Disney World vacation, please send an email to Pixie Vacations authorized Disney travel agent Stacey Frost ([email protected]), call (407) 454-1477 or fill out this form for complimentary travel planning. Your use of this free, no obligation, service to book your travel will help support The Disney Blog. Thank you.