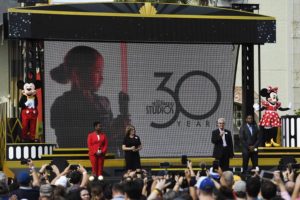 On its 30th anniversary, May 1, 2019, Disney’s Hollywood Studios revealed a new logo for the theme park during an anniversary celebration at Walt Disney World Resort in Lake Buena Vista, Fla. The celebration also included a cavalcade of favorite Disney characters, led by Mickey Mouse and Minnie Mouse, down Hollywood Boulevard to celebrate the past, present, and new, exciting future of Disney’s Hollywood Studios. (David Roark, photographer)