It wasn’t a big secret that Disneyland was looking to add a version of Mickey & Minnie’s Runaway Railway, with its groundbreaking 2D+ technology, to its ToonTown. The rumor was made official with an opening announced for sometime in 2022.

The first Mickey & Minnie’s Runaway Railway is still under-construction at Disney’s Hollywood Studios and its opening date has been pushed back from late 2019 to early 2020.

This will give both coasts their first major Mickey Mouse-themed ride-through attraction. The story will put guests inside the colorful and unpredictable world of a Mickey Mouse cartoon short. Guests will board a train where Goofy is the engineer, which means guests are in for a wacky adventure.

The attraction uses state of the art technology and Disney’s visual effects knowledge to transport guests into a cartoon world of incredible and immersive multi-dimensional fun. As you can see from this updated concept art, it will fit right into Towntown. 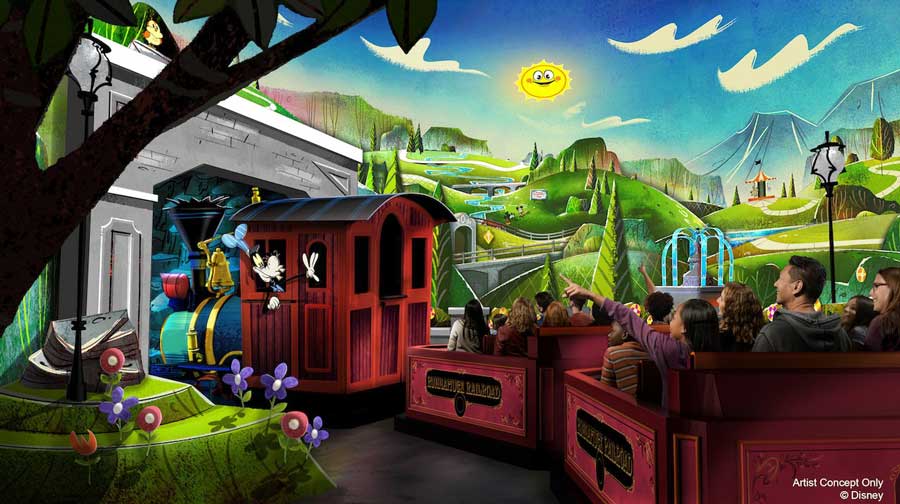 At Disney’s Hollywood Studios the attraction is replacing the beloved “Great Movie Ride” at Disneyland, it is expected to take over a large building just behind ToonTown where the park’s entertainment team holds rehearsals. No current Toontown attractions are expected to close to make room for “Mickey and Minnie’s Runaway Railway,” but the Gag Factory might become the entrance and exit for the ride.

There’s a lot going on at Disney’s Hollywood Studios with Star Wars: Galaxy’s Edge expected to open this fall. The park still needs to add even more guest capacity to handle the crowds that are expected to descend on it. Because of that, I’m a bit surprised that “Mickey and Minnie’s Runaway Railway” has slid back its opening.

What are your thoughts about “Mickey and Minnie’s Runaway Railway” pushing back its Orlando date and opening a second location in Anaheim?