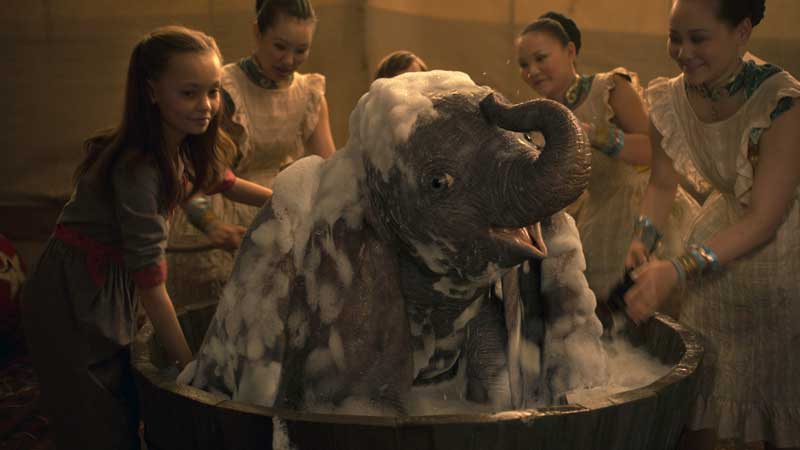 Disney’s “Dumbo” is an enchanting Tim Burton fairy tale that will take audiences on a journey through eyes of society’s outcasts – circus folk. Those worried about this being another Disney live-action remake, can put their fears to rest. Burton and screenwriter Ehren Kruger have created something quite original that takes the problematic story of Walt Disney’s 1941 animated feature and uses it to tell a new story about love, loss, and redemption.

The story starts with the Medici Bros. Circus breaking out of its Sarasota, FL winter camp and heading north to entertain through small town America. The circus is down on its luck and Max Medici has made the purchase of a pregnant elephant, Mrs. Jumbo, in the hopes a cute baby pachyderm will attract audiences again.

Entering the movie is Holt Farrier, a war veteran, whose wife, and circus act partner, died while he was fighting overseas and whose two children have been in the care of the circus family while he was gone. Farrier’s horse act has been sold off to help the circus so he is put in charge of the Elephants.

Once baby Jumbo is born, the Farrier children discover that his oversize ears have a special purpose, while their father takes on trying to fit the elephant baby into the Circus act somehow. The result is a special kind of circus magic that lifts the fortunes of the Medici Bros. Circus.

Adding the Farrier family, whose kids lost their mother, to the story of Dumbo provides an immediate emotional connection with Baby Jumbo once he stumbles into their world. Their father Holt lost not just his wife while he was overseas fighting in the war, but his arm as well. The children lost their own arm and are searching for

The movie really starts to soar when the antagonist enters the movie. Entrepreneur V.A. Vandevere makes big promises to Medici and transports the troop to Dreamland with hopes that Dumbo’s flying act can bring them all riches. But Dreamland is full of dark secrets. 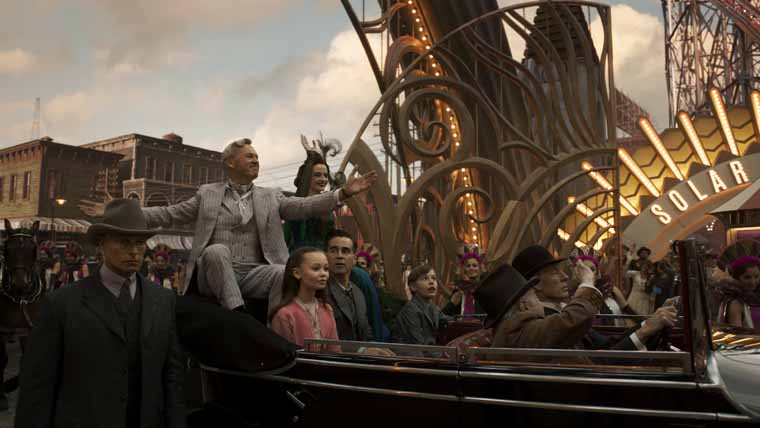 Unlike the first movie, the animals don’t speak or sing, but the movie does make a point of highlighting how they are creatures with agency with desires and loss. Dumbo and his mom Mrs. Jumbo are entirely computer generated creatures and do a lot of emoting through their eyes and facial expressions.

Danny Elfman’s score is lilting and enigmatic, punctuating moments throughout the film almost as another character itself. He scatters musical tributes to the movie’s original songs throughout the film, while putting his own spin on classics like “Casey Junior,” “When I see an Elephant Fly,” and “Pink Elephants on Parade.”

The movie is filmed with a very simple, minimalist and at times surrealistic look. Burton and his team studied a lot of film noir to develop the stripped-down environments and lighting strategies used in “Dumbo.” The result is a balance between reality and expressionism that gives the film its dark fairy tale feel.

Fans of the original will notice quite a few homages to Walt Disney’s animated classic.

The first half of Disney’s “Dumbo” does suffer from some wooden writing and acting. At times it was so slow that the kids in the theater lost focus and started wandering around. Once the movie makes it to Dreamland the movie really picks up and kept everyone’s attention where it belonged, on the screen. The film’s double denouements were the perfect codas for the story’s main characters and left my spirits soaring just like the title character itself.

Should you go see Disney’s “Dumbo” in theaters? It’s a perfectly fine PG film with a large dose of onscreen magic that Burton and Disney are known for. I might leave the littlest toddler’s at home for this one and wait for the DVD release. But children and adults who still are children at heart will get a lot from Tim Burton’s take on this classic Disney tale.