Toy Story 4 is the 21st feature length film to be released by Pixar Animation Studios. The company has come a long way from it’s first ever feature film – the first Toy Story. A new trailer and poster for the 4th movie chronicling the adventures of Buzz Lightyear, Woody and all their toy friends, has just been released

Okay. Forky does have some issues. But any excuse for a road trip, right?

We really love the new poster: 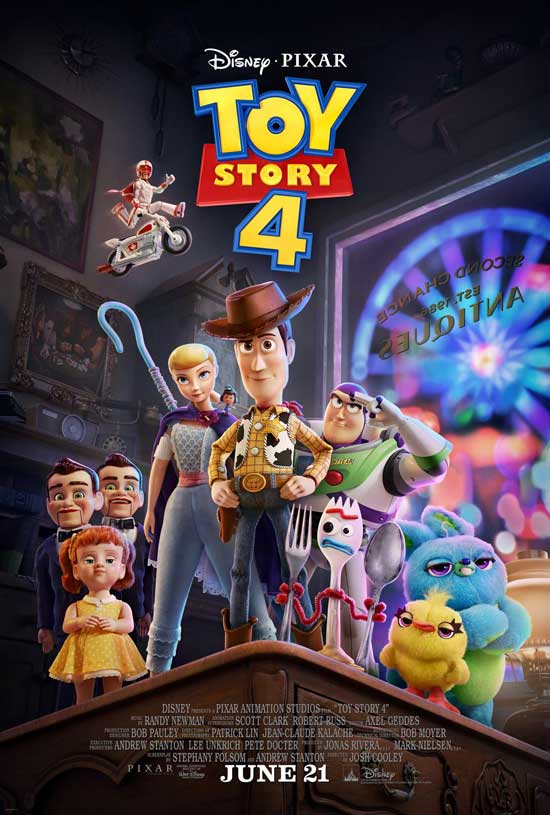 The poster is maybe one of the more beautiful ones I’ve seen in years. The way the carnival lights glow outside the window of the Antique shop, the slightly darker shadowing on our main characters, a ‘Sunday on La Grande Jatte’ by Georges Seurat painting, and an iconic dogs playing poker painting featuring a cameo from Dug the dog from Pixar’s “Up!”

The cast of characters in Toy Story 4 has grown according to this new poster. There’s a Polly Pocket on Bo Peep’s shoulder, those appear to be antique dolls and ventriloquist dummies on the left. And I have no idea who that guy on the flying stunt motor cycle is (although I’m pretty sure I had that toy as a kid). Of course there’s Forky, and Ducky and Bunny who we’ve already been introduced too.

All these characters, and more of our favorites will join Woody and Buzz Lightyear in the new film.

I don’t know about you, but this new trailer has me excited for a movie I wasn’t really sure we even needed. But now I’m sure. I need Toy Story 4 in my life. How about you?

Woody has always been confident about his place in the world and that his priority is taking care of his kid, whether that’s Andy or Bonnie. But when Bonnie adds a reluctant new toy called “Forky” to her room, a road trip adventure alongside old and new friends will show Woody how big the world can be for a toy.

Directed by Josh Cooley (“Riley’s First Date?”) and produced by Jonas Rivera (“Inside Out,” “Up”) and Mark Nielsen (associate producer “Inside Out”), Disney•Pixar’s “Toy Story 4” ventures to U.S. theaters on June 21, 2019