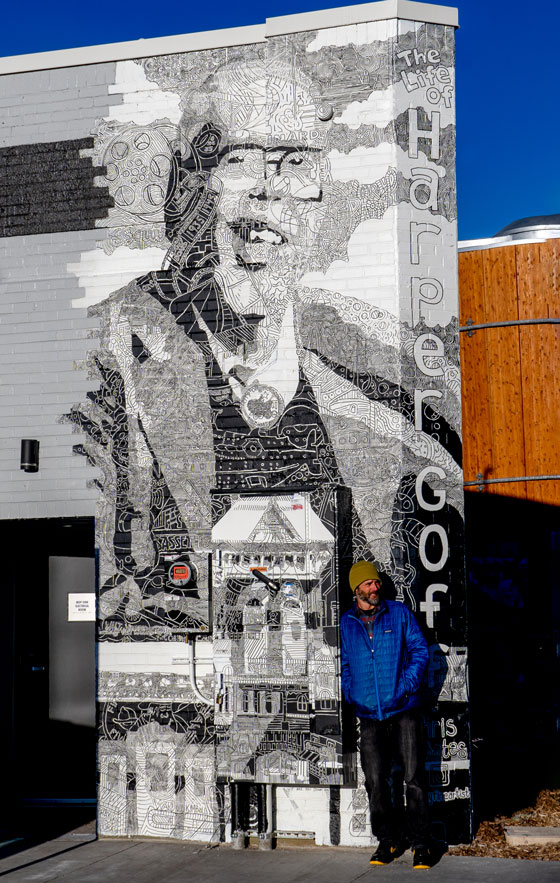 Disney artist and Imagineer Harper Goff created many of the iconic on-screen and real world attractions you associate with the Disney brand. Alas, his influence is largely unknown unless you’re a die-hard Disney buff or grew up in Fort Collins, CO where Goff himself was born and raised. A new mural by Fort Collins artist Chris Bates aims to expose the story of Goff to a wider world.

The black and white mural depicts Fort Collins born, Disney legend Harper Goff. Titled “The Life of Harper Goff” this painting tells the life story of Goff inside of his portrait using a technique that Bates dubs “finetooning”. This mural is the first of it’s kind and uses a barrage of line work and detail to build an impressive piece of art that serves as art piece, historical document and local landmark.

Goff was a talented artist, musician, and actor. His love of model trains led him to meet Walt Disney at a store when they both wanted to buy the same kit. The rest, as they say, is history.

If you look in the mural you’ll see tributes to the The Nautilus from 20,000 Leagues under the Sea, Jungle Cruise boats, and of course Disneyland’s Main Street USA and Town Square, where Goff modeled many of the buildings after those from his hometown – including the iconic Town Hall. There’s also a fun tribute to the Firehouse Five plus Two band that Goff was a member of (he played he Banjo). 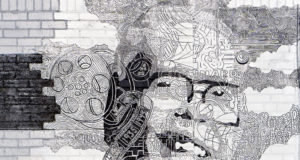 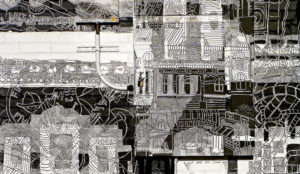 Watch the story behind the mural with artist Chris Bates in this video documentary:

Bates has never been to Disneyland, but is a big fan of Goff who is says is “an immense talent” with a impressive resume and life story.

“I was motivated to tell his [Goff’s] story because not only is he one of the most talented people to ever come out of our town, but he is largely unknown outside of Disney and history buffs,” said Bates.

If you’re ever in Fort Collins yourself, you can go and see the piece of in person at 200 North Pine street at the intersection of Harper Goff Alley and Old Firehouse Alley, which also serves as the main entrance to the soon to be opened Crooked Stave Taproom.