The Rose Bowl is a 105 year old tradition that’s central to college football and the teams that are invited to play get to make memories that last a lifetime thanks to events before and during the game. One of those those events is the visit to Disneyland in Anaheim, CA.

This year it’s the Ohio State Buckeyes and the Washington Huskies who have won berths in the 2019 Rose Bowl presented by Northwestern Mutual in Pasadena, CA. They visited Disneyland on Wednesday, Dec. 26 where they got to see some of the newly rebranded attractions and restaurants in Disney California Adventure’s Pixar Pier.

The teams will play in the 105th Rose Bowl Game on Tuesday, January 1, 2019. Ohio State finished the regular season with a 12-1 record and claimed the Big Ten Conference title, while Washington defeated Utah to win the Pac-12 Championship, finishing with a 10-3 record. Before meeting on the field, the teams will meet for their first official pre-game appearance, and only joint appearance of bowl week, at Disneyland. 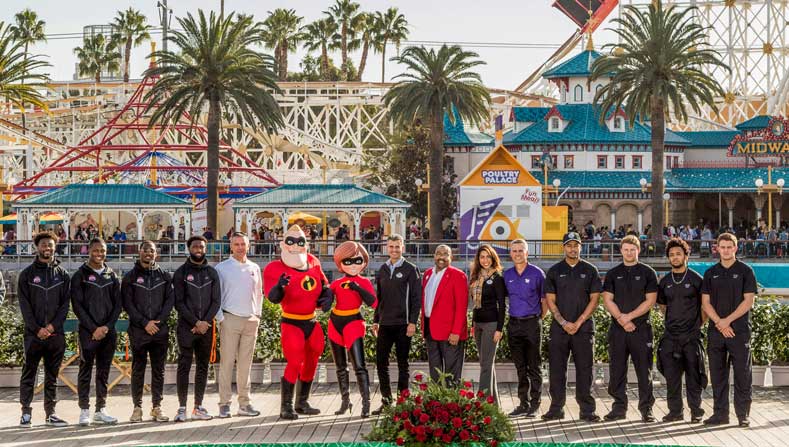 The Buckeyes will make their 15th appearance in the Rose Bowl Game. Ohio State is 7-7 in Pasadena on New Year’s Day, most recently defeating Oregon, 26-17, in 2010.

The Huskies will also make their 15th appearance in the Rose Bowl Game. Washington is 7-6-1 overall in The Granddaddy of Them All. In their last Rose Bowl Game in 2001, the Huskies defeated Purdue, 34-24.

This year’s Rose Bowl Game be the 12th meeting between the Ohio State Buckeyes and the Washington Huskies, but will be the first occurrence in The Granddaddy of Them All – The Rose Bowl.