A new video posted online this week shows the huge scope and the in-progress state of construction for Star Wars: Galaxy’s Edge at Disneyland. The 14-acre land is set in a small traders outpost called Black Spire on the outer rim planet of Batuu. Inside Disneyland, it can be reached via paths in Critter County and Frontierland once it opens in Summer 2019.

Most exciting is the nearly complete and very impressive ‘full-scale’ Millennium Falcon. Cast Members who have toured the construction site say it’s very realistic when you see it in person.

To get a sense of the scale look how the showbuilding for the Rise of the Resistance attraction dwarfs splash mountain. Oddly, Big Thunder Mountain Railroad’s spires almost fit into the towers of Black Spire Outpost.

Notice how close the Disneyland Railroad comes, definitely expecting some sound intrusion from the train, not to mention the Mark Twain. It will be interesting to see if those whistle blasts get incorporated into the story somehow.

There are a couple areas of construction that appear to be more advanced. A little courtyard area across from the main restaurant has a nearly completely finished exterior and looks like its waiting for some landscaping work. Then it will be ready for filming some promotional work for the land.

Also advanced is the Millennium Falcon area, which hides the Millennium Falcon: Smugglers Run attraction. Disney’s already released one piece of promotional imagery from that section of Black Spire Outpost and I’m sure marketing is itching to get in there and film with the iconic spaceship. 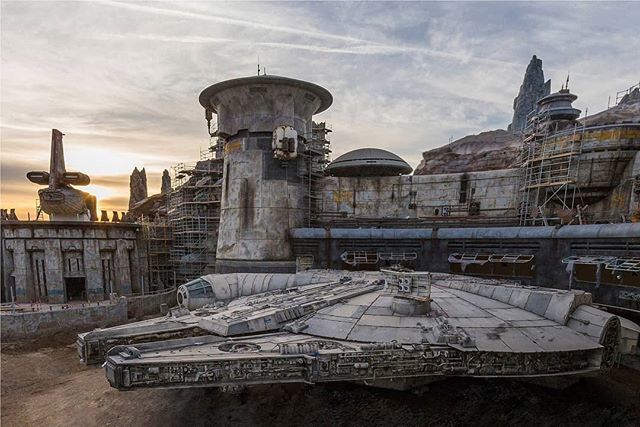 Rogue Aviation filmed the video on December 7th, 2018. More videos and photos are available on their website.

We’re told that employee training starts in February, which usually means handoff to operations is not too far behind. Will you try to get to Disneyland to witness the opening of Star Wars: Galaxy’s Edge?

previousStar Wars: Episode IX – The one year countdown is on
nextPixar: 30 years of computer-generated animation in film