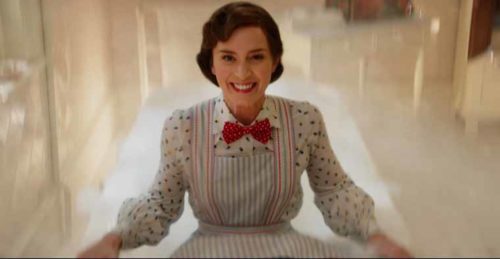 When hard times and personal loss visit the Banks family in their home on Cherry Tree Lane in depression era London, it’s time for the magical nanny Mary Poppins to return and help them find the joy and wonder that’s missing in the family’s lives. That’s the basic plot of Disney’s “Mary Poppins Returns,” which opens with special preview shows tomorrow night and with regular showings on Wednesday.

The movie has a new story to tell, but is also a loving homage to the original. Much of the movie will seem very familiar to fans of the original. Two new clips from “Mary Poppins Returns” and one new featurette take you into the magic of the film.

Clip One: Can you Imagine that is the first big fantasy number of the film

Finally a new featurette looks at how Meryl Streep brings Cousin Topsy to life in the film.

Will you be seeing “Mary Poppins Returns” at your local cinema this week?

In Disney’s “Mary Poppins Returns,” an all new original musical, Mary Poppins is back to help the next generation of the Banks family find the joy and wonder missing in their lives following a personal loss. Emily Blunt stars as the practically-perfect nanny with unique magical skills who can turn any ordinary task into an unforgettable, fantastic adventure and Lin-Manuel Miranda plays her friend Jack, an optimistic street lamplighter who helps bring light—and life—to the streets of London.