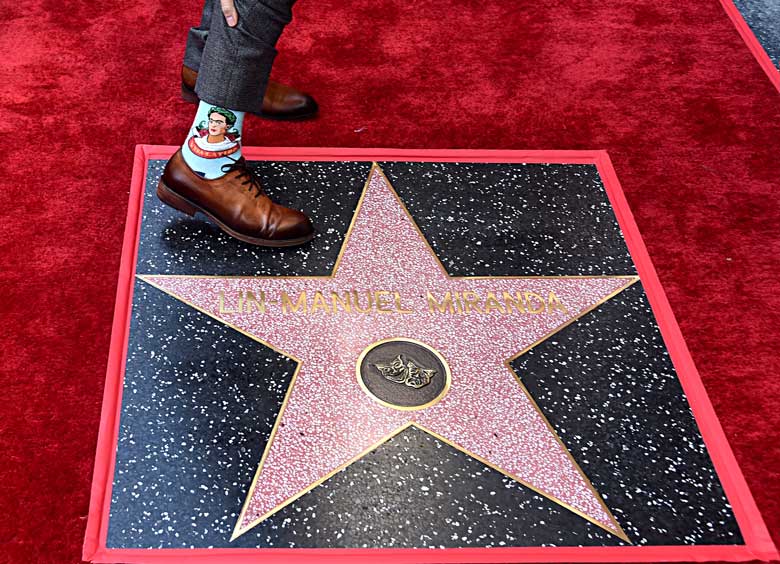 Lin-Manuel Miranda, currently on the big screen as Jack in Disney’s Mary Poppins Returns, received a star on the Hollywood Walk of Fame yesterday. Miranda was joined by his wife Vanessa Nadal and other family members. Guest speakers at the ceremony include “Weird Al” Yankovic and Rita Moreno. Look closely in the photo above and you’ll see Miranda wearing “Vida La Vida” Frida Kahlo socks. That loosely translates to “Hooray for Life,” an attitude that Miranda appears to live every day.

A Hollywood Walk of Fame Star is big moment reserved for those who have contributed to the culture of America in some significant way.

Watch a replay of the dedication ceremony here:

Born in Washington Heights neighborhood of New York, Miranda is an award-winning composer, lyricist, and performer, as well as a 2015 MacArthur Foundation Award recipient. His current musical, Hamilton – with book, music and lyrics by Miranda, in addition to him originating the title role – opened on Broadway in 2015. Hamilton was awarded the 2016 Pulitzer Prize in Drama and earned a record-breaking 16 Tony Nominations, winning 11 Tony Awards including two personally for Miranda for Book and Score of a Musical. 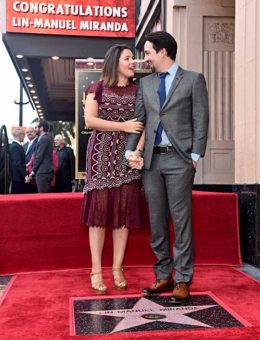 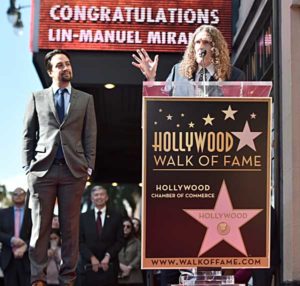 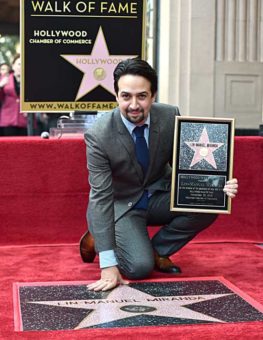 The man, the myth, the legend himself

Among his many other achievements Miranda contributed music, lyrics and vocals to several songs in Disney’s feature film Moana, earning him an Oscar nomination and Grammy Award for the original song, “How Far I’ll Go.” He also provides the voice of Gizmoduck in Disney’s revival of the animated series “Duck Tales.”

Miranda’s ceremony came in the middle of a whirlwind tour of press for Disney’s “Mary Poppins Returns” which is stars in with Emily Blunt. The all-new original musical and sequel opens nationwide on December 19.

Miranda’s star, the 2,652nd star on the Hollywood Walk of Fame, can be found at 6243 Hollywood Boulevard in front of the historic Pantages Theatre.